The core of the KKR team remains the same as it was last season. At the IPL auction ahead of the 12th edition, Knight Riders fine-tuned with some overseas and local players. 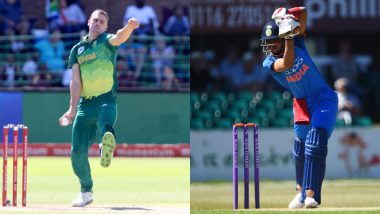 The core of the KKR team remains the same as it was last season. At the IPL auction ahead of the 12th edition, Knight Riders fine-tuned with some overseas and local players. Windies all-rounder Carlos Brathwaite was their highest pick at INR 5 Crore as KKR mostly snapped players at their base price, which includes some new faces as well. Meanwhile, ahead of IPL 2019, we have listed three young players from KKR squad that we think could make the difference for the Bollywood superstar Shah Rukh Khan co-owned team.

Shubman Gill: The talented right-hander was part of the KKR squad last season as well and played 13 matches for the franchise. However, it was not the best of the start for the youngster. However, this season, Gill is set for a major role with the franchise and is likely to bat at number three. Kolkata Knight Riders Tickets for IPL 2019 Online: Price, Match Dates and Home Game Details of KKR in Indian Premier League 12.

Prithvi Raj Yarra: Knight Riders picked 21-year-old fast-bowler for a base price of INR 20 Lakhs. The Andhra left-armer made his First-class debut in 2017 and has played only six matches. But in those six games, he has been impressive having picked 21 wickets. The medium-pacer made is T20 debut recently for Andhra in the Syed Mushtaq Ali Trophy this year and in the only opportunity, he scalped three wickets. With Shivam Mavi and Kamlesh Nagarkoti ruled out due to injuries, Prithvi could well find a chance to impress one and all.

Anrich Nortje: KKR managed to pick South African pacer for a base price of INR 20 Lakhs as well. The 25-year-old pacer made his ODI debut recently against Sri Lanka and picked eight wickets in four matches. He has also been named in Proteas T20I squad for Sri Lanka series. Nortje will arrive in IPL with some experience of international cricket behind his back and that will be handy for KKR. UPDATE: Anrich Nortje has been ruled out of IPL 2019 due to a shoulder injury.

Knight Riders happens to be the most profitable franchise in IPL and was making a profit even when other franchises struggled. Apart from lifting the IPL trophy twice, KKR has managed to reach playoffs four times. In past three seasons, they have finished in top four but failed to qualify for the finals.

(The above story first appeared on LatestLY on Mar 19, 2019 07:45 AM IST. For more news and updates on politics, world, sports, entertainment and lifestyle, log on to our website latestly.com).