This Day, That Year: When India Defeated Pakistan in the Semi-Final of ICC Cricket World Cup 2011

Both the sides enjoyed a sensational run in the mega-tournament and thus, predicting the favourites wasn’t easy. However, Pakistan never had won a Cricket World Cup match against India and both the side would have certainly had that thought in mind. 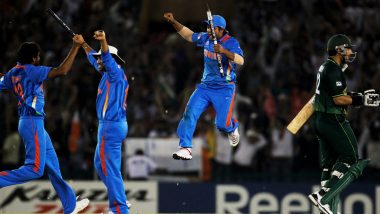 Any India vs Pakistan match is a high-voltage encounter and with a place in World Cup Finals in stakes, the clash tends to get thrilling. We are talking about the Indo-Pak clash in the 2nd semi-final of 2011 World Cup which was played on exactly this day (March 30). Both the sides enjoyed a sensational run in the mega-tournament and thus, predicting the favourites wasn’t easy. However, Pakistan never had won a Cricket World Cup match against India and both the side would have certainly had that thought in mind. On This Day: When Virender Sehwag Became the First Indian to Register Triple Century in Test Cricket.

Batting first at Mohali, Virender Sehwag got India off to a flier with a flurry of boundaries. In fact, the opener smashed pacer Umar Gul for five boundaries in the third over of the game. However, left-arm pacer Wahab Riaz dismissed Sehwag in the sixth over and gave his side a huge sigh of relief. The speedster didn’t stop after that and rattled India’s middle order. He took a memorable five-wicket haul and put the home side on the back foot. Nevertheless, master blaster Sachin Tendulkar didn’t put his guards down and made 85 runs. In the end-overs, Suresh Raina made 36 crucial runs and guided India to 260 in the first innings.

In reply, all the Pakistani batsmen got off to good starts but none of them were able to pile up significant scores. All the Indian bowlers bowled at an impeccable line and length and pushed Pakistan completely out of the contest. Misbah-ul-Haq tried to make a fight back and made a gritty half-century. However, the other batsmen weren’t able to contribute much as the Men in Green were packed for 231 runs and lost the match by 29 runs.

Sachin Tendulkar was adjudged the Man of the Match as India defeated Pakistan for the fifth time in ODI World Cups and advanced to the finals of the tournament. They eventually went on to defeat Sri Lanka in the finals by six wickets and lifted their second World Cup title.

(The above story first appeared on LatestLY on Mar 30, 2020 11:23 AM IST. For more news and updates on politics, world, sports, entertainment and lifestyle, log on to our website latestly.com).