Its just not cricket, an Australian slang that means, "having something that is unjust or just plain wrong done to someone or something.This come from the game of cricket which is regarded as a gentleman's game were fairplay was paramount." Much irony for the nation that bore the slang is now stand accused of something so unfair that one cannot turn a blind eye to. 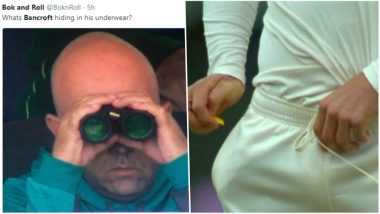 Ongoing Australia’s Tour of South Africa has hit an all-time low in terms of the spirit of cricket. Australian skipper Steve Smith admitted to his side of ball-tampering during the third Test played at Newlands, Cape Town. The disgraceful act was committed by rookie opening batsman Cameron Bancroft who was caught on television camera holding a small, yellow object and working on the rough side of the ball. The infamous Sandpaper Gate involved Steve Smith with the captain admitting that his ‘leadership group’ came up with the idea at lunch on Day Three of South Africa vs Australia Third Test at Newlands. Twitterati who was already sure of Aussie side’s misdemeanour after seeing Brancroft’s ball tampering video and now with Smith openly admitting to their guilt, the shocked cricketing fans have pounced upon them on the microblogging platform. It's Just Not Cricket but Sandpaper Gate! Steve Smith & Cameron Bancroft Confess Ball Tempering against SA in Australia Team Press Conference Video.

It's just not cricket, an Australian slang that means, "having something that is unjust or just plain wrong done to someone or something. This comes from the game of cricket which is regarded as a gentleman's game where fairplay was paramount." Much irony for the nation that bore the slang is now stand accused of something so unfair that one cannot turn a blind eye to.

Australian opening batsman Cameron Bancroft has been charged with ball tampering by the match referee and International Cricket Council (ICC) after he admitted of using tape to illegally alter the condition of the ball on Saturday’s play. Television footage showed Bancroft take on the object out of his pocket while fielding and later was seen tucking the object down the front of his trousers. Bancroft said: "I was in the wrong place at the wrong time. I want to be here (in the press conference) because I want to be accountable for my actions."

In case you missed it, this #SandpaperGate #BallTampering is utterly outrageous. It’s just not cricket. #BanBancroft pic.twitter.com/Z3zpIA32Jr

Meanwhile, Smith confessed it was a well-thought-of ‘deliberate’ plan from the “leadership group” to tamper with the ball. With Sandpaper Gate causing an uproar in the cricketing world, Steve Smith clarified his stand of not stepping down as the team’s skipper.

During the press conference after third day’s play, he was quoted saying, “The leadership group knew about it, we spoke about it at lunch,” Smith said. “I am not proud of what has happened. It’s not in the spirit of the game, my integrity and the integrity of the team has been damaged and rightfully so. It’s not on and it won’t happen again, I can promise you.” His apologies seem to be not enough for baffled fans who reacted both angrily and loaded with sarcasm at Smith and his side for cheating on Twitter.

2. Did Bancroft and Others Forget About Existence of Multiple Cameras?

3. Hahahha, A Much-Needed Step in Case of Bancroft

4. A Complete Idiot, We Must Say

The look on @davidwarner31 face says: “Aw mate are you an idiot!” When he sees what #Bancroft is up to #SAvAUS @MikeHaysman @7polly7 pic.twitter.com/uu6tJ933jK https://t.co/6hYuBf5Zix

Aiden Markram and AB de Villiers batted South Africa into a strong position, leaving South Africa at 238 for five in their second innings when bad light ended play, an overall lead of 294. The series is tied at one match apiece. Opening batsman Markram made 84 and De Villiers batted with unusual caution to be 51 not out at the close.

(The above story first appeared on LatestLY on Mar 24, 2018 11:23 PM IST. For more news and updates on politics, world, sports, entertainment and lifestyle, log on to our website latestly.com).