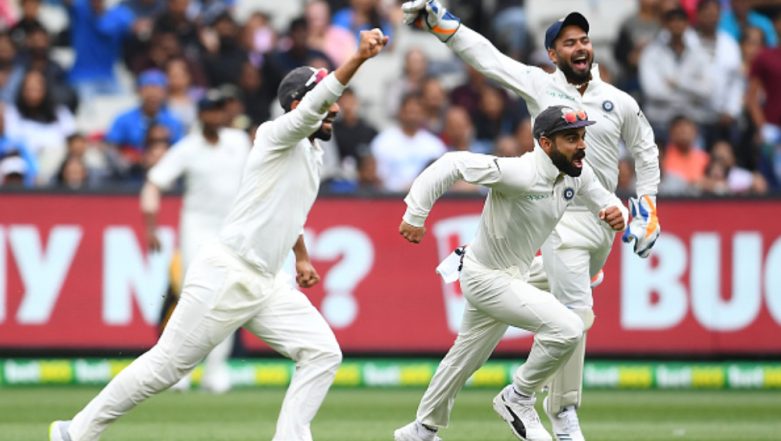 It took India just 4.3 overs to wrap things up after the rain washed out entire first session on day five of the third Test at the Melbourne Cricket Ground (MCG). Jasprit Bumrah and Ishant Sharma picked a wicket each on day five to help India register a 137-run win. With this victory, India now takes an unassailable 2-1 lead in the four-match series with one game to go and retains the Border-Gavaskar Trophy as well. Ind vs Aus 3rd Test Full Scorecard.

On day four, Pat Cummins showed resilience and scored a fighting half-century to take the game to day five. He and Nathan Lyon made sure India had to work hard to pick the ninth wicket. However, on the fifth day, once the sun was out Indian bowlers wasted no time to bundle out Australia. This is India’s only seventh Test win on Australian soil and now are just one victory away from clinching the historic series.

For Australia, Cummins was the top-scorer, he scored 63 off 114 balls to register his second Test half-century. Shaun Marsh scored 44 on day four of the Test.

India won the opening Test at Adelaide by 31 runs. Hosts Australia then bounced back in the series to make it one each with a 146-run win at Perth. And now India takes back the lead and will be pushing for a series win at Sydney. The fourth and last Test starts on January 03.