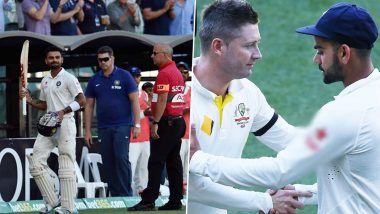 There was a time when the Indian Test team was criticized for its defensive approach in overseas matches and were also labelled as a home-track bully. However, things got changed when Virat Kohli took over the reins of the team in 2014. Making his Test captaincy debut in the first Test of Border-Gavaskar Trophy 2014-15 at Adelaide, Kohli stunned one and all and almost guided India to a historic triumph. Although, the visitors lost the game by 48 runs. However, Kohli feels that it was that Adelaide encounter only which laid the foundation of the mighty Test side which India is today. Virat Kohli Has the Ability to Play Each Format According to What Its Demands, Says Batting Coach Vikram Rathour.

“Throwback to this very special and important test in our journey as the test team that we are today. Adelaide 2014 was a game filled with emotion on both sides and an amazing one for people to watch too. Although we didn't cross the line being so close, it taught us that,” wrote Kohli while sharing a couple of pictures from that encounter on Twitter.

“Anything is possible if we put our mind to it because we committed to doing something which seemed very difficult to begin with but almost pulled it off. All of us committed to it. This will always remain a very important milestone in our journey as a test side,” he added.

(2/2)..anything is possible if we put our mind to it because we committed to doing something which seemed very difficult to begin with but almost pulled it off. All of us committed to it. This will always remain a very important milestone in our journey as a test side. 🇮🇳💙

Speaking of the events of the game, Australia posted 517/7 while batting first courtesy centuries from David Warner, Steve Smith and skipper Michael Clarke. In reply, India made a brilliant fightback, piling up 444 runs. Kohli made 115 in India’s first innings. Warner scored his second hundred of the game as Australia declared at 290/5 in the third innings.

Chasing 364 for victory in the fifth-day Adelaide track, India’s loss was set on the cards. However, opener Murali Vijay put up a solid performance and scored 99 runs. Skipper Kohli shone again as he scored another staggering ton. Despite not getting much support from the other end, Kohli was determined to upset the Aussies. He was on the verge of scripting history. However, Nathan Lyon accounted for his wicket at 141 as India lost the game by 48 runs.

Kohli eventually became India’s permanent Test captain by the end of the series as MS Dhoni announced Test retirement. The Delhi-born cricketer didn’t look back after that as he played several jaw-dropping knocks and guided his side to many victories. In fact, with 33 wins from 55 Tests, Kohli is the most successful Test captain. Also, four years later, skipper Kohli redeemed his side by defeating Aussies at their own den by 2-1 in 2018-19 series.

(The above story first appeared on LatestLY on Jun 30, 2020 04:35 PM IST. For more news and updates on politics, world, sports, entertainment and lifestyle, log on to our website latestly.com).