Anushka Sharma has been extremely busy with her film projects. This year Anushka had films like Pari, Sui Dhaaga and Zero will be releasing soon. 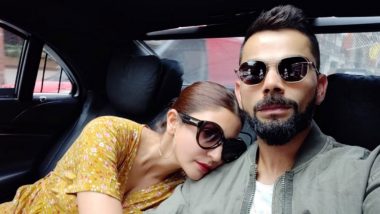 Anushka Sharma has been extremely busy with her film projects. This year Anushka had films like Pari, Sui Dhaaga and Zero will be releasing soon. Ditto with her hubby Virat Kohli who hs been tied up with series after series breaking records. But, Anushka made some time from her busy schedule for Virat and has special plans for the Indian cricket captain who will celebrate his 30th birthday on November 5. After the launch of the trailer of Zero, Anushka was spotted with Virat at the airport. Best moments from Zero trailer.

As per reports, the couple has flown down to Dehradun to celebrate the India cricket captain’s birthday. Virat is currently off cricketing duties as he is not a part of the three-match T20 series against West Indies that begins today in Kolkata. Pictures of the duo at the airport went viral and many fan pages shared the snaps of the two. Not Just Virat Kohli, RCB Cheer Up Anushka Sharma on Her 30th Birthday With a Win Over Mumbai Indians!

Dressed in white, Anushka wore a white Gucci top and matching track pants and paired it up with black shoes. Virat, on the other hand, looked sporty donning looking sporty in a black t-shirt, black track pants and white shoes. The black cap enhanced his sporty look.

Anushka had brought in her 30th birthday earlier in May where Virat left no stone to make her feel special. Anushka flew to Bengaluru where Virat was playing the IPL. Picture of the duo went viral, where Virat was seen celebrating Anushka’s birthday.

(The above story first appeared on LatestLY on Nov 04, 2018 04:21 PM IST. For more news and updates on politics, world, sports, entertainment and lifestyle, log on to our website latestly.com).