The former cricketer was not pleased with Kohli saying that India were on the back foot after losing two early wickets and said that, "When a player like Virat Kohli is out there in the middle, there is no way the match has ended. He had not played even two balls and was thinking like that. So, it shows India's approach." 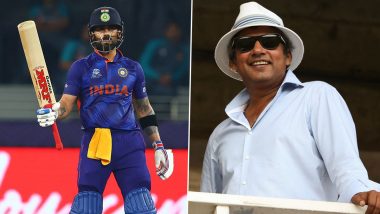 India quest of regaining the T20 World Cup title did not have an ideal beginning as the side suffered a humiliating 10-wicket loss to neighbours Pakistan. After the match. Indian skipper Virat Kohli opened up about the possible reasons why India lost and reckoned that the early loss of KL Rahul and Rohit Sharma dented their innings and they were pushed on the backfoot. And former cricketer Ajay Jadeja was not particularly happy with such a statement coming from the Indian captain. Speaking on a show, he said, "I heard Virat Kohli's statement that day. He said when we lost two wickets, we fell behind in the match against Pakistan. I was disappointed with that."Virat Kohli Annoyed With Reporter Who Questioned Rohit Sharma's Place In Indian Team Following Loss To Pakistan (Watch Video)

"When a player like Virat Kohli is out there in the middle, there is no way the match has ended. He had not played even two balls and was thinking like that. So, it shows India's approach," Jadeja added, as quoted by Cricbuzz Hindi Live. ICC T20 World Cup 2021 Points Table

Kohli was the lone star in India's shoddy batting performance, scoring 57 runs off 49 balls which included five fours and one six. Chasing 152 to win, Pakistan dominated their way to the target, with Mohammad Rizwan and Babar Azam remaining unbeaten of 75 and 68. Pakistan won the match with 13 balls to spare and India were handed a maiden loss by their arch-rivals in World Cup matches.

India next take on New Zealand in a virtual must-win contest on Sunday, October 31.

(The above story first appeared on LatestLY on Oct 28, 2021 11:39 AM IST. For more news and updates on politics, world, sports, entertainment and lifestyle, log on to our website latestly.com).