The Men in Blue lost the game against England by 31 runs and with this, the chances of Pakistan qualifying for the semi-finals of the ICC Cricket World Cup 2019 got slimmer. This infuriated Pakistan’s Waqar Younis who lashed out at India’s sportsmanship via a tweet. This surely did not go down well with the Indian fans who trolled him brutally. 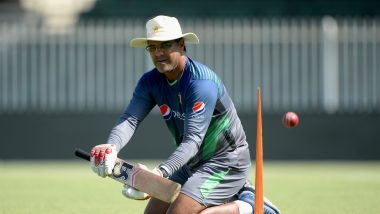 Team India’s unbeaten run at the CWC 2019 was brought to a halt by England yesterday at the Edgbaston Cricket Ground, Birmingham. The Men in Blue lost the game by 31 runs and with this, the chances of Pakistan qualifying for the semi-finals of the ICC Cricket World Cup 2019 got slimmer. This infuriated Pakistan’s Waqar Younis who lashed out at India’s sportsmanship via a tweet. “It's not who you are.. What you do in life defines who you are.. Me not bothered if Pakistan gets to the semis or not but one thing is for sure.. Sportsmanship of few Champions got tested and they failed badly #INDvsEND #CWC2019,” read his tweet. This surely did not go down well with the Indian fans who trolled him brutally. Waqar Younis, Former Pakistan Pacer, Questions Indian Team’s Sportsmanship After Loss Against England in ICC Cricket World Cup 2019.

The Indian fans lashed out at the former Pakistani cricketer and said that he should rather focus on his team’s performance. A few of them also asked the former cricketer to ask Sarfaraz Ahmed and men to play well instead of relying on others. India yesterday chased a total of 337 runs and showed a lack of intent on the field and lost the game by 31 runs. MS Dhoni and Kedar Jadhav were subjected to criticism for their slow batting. Check out a few tweets below:  India vs England Highlights of ICC World Cup 2019 Match: ENG Beat IND, Stay in Contention for Semi-Finals.

Waqar. I've got a huge amount of respect for you as you know. But that tweet is inflammatory and quite frankly irresponsible.

As soon as Hardik was out India knew chances of a win were gone and protected their NRR.

Not everyone is out to get you!

Who gave them a chance to manipulate

Do the job well which is assigned to you

Responsibility is only PCB and pakistani cricket

Focus on not losing to teams like west indies next time?

Who had stopped you from winning on 3 matches which you lost? India? Your players can't win matches which means you will start blaming others? India ke bharose world cup jitne ke sapne dekhte ho? This is Team India, we play for our own Team & Country. Not pakistan.

England is back in the top four as they have one point more than Pakistan. On the other hand, team India will next play against Bangladesh tomorrow at the Edgbaston Cricket Ground in Birmingham.  The Indians would want to win the next match to confirm their berth in the semis.

(The above story first appeared on LatestLY on Jul 01, 2019 01:34 PM IST. For more news and updates on politics, world, sports, entertainment and lifestyle, log on to our website latestly.com).