Dayal was handed a debut by Gujarat Titans in their IPL 2022 clash against Rajasthan Royals on April 14, Thursday. He picked up the wickets of Devdutt Padikkal and Rassie van der Dussen so far. 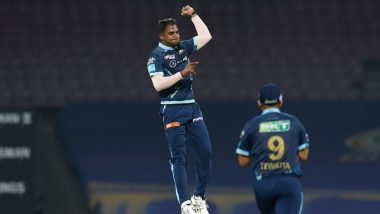 IPL 2022 has indeed been a great platform for young Indian cricketers to seize the opportunities for their franchises and rise to the occasion. The latest addition to that list of talented young cricketers is Yash Dayal. The left-arm pacer was named in Gujarat Titans' squad to face Rajasthan Royals on April 14, Thursday. Making his debut for the IPL newcomers, the young bowler has put in a good display, enough for the side to warrant him a spot in the playing XI for the upcoming matches. Jos Buttler Scores 23-Ball Fifty in Rajasthan Royals vs Gujarat Titans IPL 2022 Clash

Dayal did not have a great start to his IPL debut with Jos Buttler in a mood for carnage at the other end. Despite being taken for some runs, Dayal did not lose heart but instead, kept on hitting the right areas and it ultimately helped him dismiss Devdutt Padikkal for a duck. Returning for his second spell, Dayal this time found the edge of Rassie van der Dussen's bat with a beautiful delivery.

Here are some quick facts about Yash Dayal:

#Yash Dayal was born in Uttar Pradesh on 13 December 1997

#Dayal has 50 first-class wickets in 14 games

The left-handed fast bowler has already shown that he can make an impact if given the opportunity. He has made an impact on his IPL debut and one can only hope it only gets better from here on.

(The above story first appeared on LatestLY on Apr 14, 2022 10:56 PM IST. For more news and updates on politics, world, sports, entertainment and lifestyle, log on to our website latestly.com).