Teams have all gathered for the International Champions Cup which stretches to the second week of August 2018. 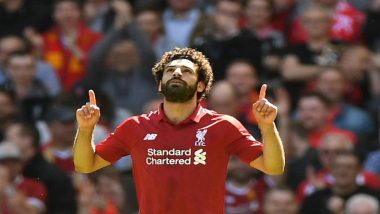 Teams have all gathered for the International Champions Cup which stretches to the second week of August 2018. The tournament is already underway and teams like Manchester United, Liverpool and many others have participated in the International Champions Cup in New York, USA. Players like Mohamed Salah have a huge fan base everywhere in the world. Now, in a video shared by Liverpool on their Instagram story, US shared a video where a band was seen cheering for Liverpool striker Mohamed Salah.

The fans sung a song taking Mohamed Salah’s name. The 26-year-old has scored 44 goals in his first season with Liverpool, which included a record-breaking 32 goals in the Premier League. Check out the video.

There was a video of the team boarding the plane.

Mo Salah also met a few fans and also obliged a few of them with autographs.

There was another video which had the team training for the upcoming match against Manchester City.

Talking about Salah, the striker took off to an undisclosed destination ahead of the pre-season matches in the US.  He was seen letting his hair down and sipping coconut on the beach and looked quite relaxed after Egypt crashed out from the Group stage from the 2018 FIFA World Cup. Mo Salah posted a few pictures on social media wherein one of them he was seen wearing a fedora and chilling on the beach. In the other picture, he was seen rowing a small boat. His vacation pictures truly gave you vacation goals.

(The above story first appeared on LatestLY on Jul 25, 2018 11:30 PM IST. For more news and updates on politics, world, sports, entertainment and lifestyle, log on to our website latestly.com).