Argentina will kick off their FIFA World Cup 2018 campaign in Russia with match against Iceland on June 16. 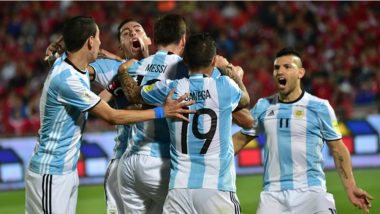 Team Argentina led by Lionel Messi, one of the iconic players in history of football will kick off their 2018 FIFA World Cup campaign in Russia with match against Iceland on June 16. Their 23-man world cup squad marks the side as the oldest team in the tournament, but head coach Jorge Sampaoli seems to have full faith in the decided team lineup. La Albiceleste lineup for 2018 FIFA World Cup in Russia is obviously revolving around the star Barcelona forward who will look forward to win the prestigious trophy missing from his collection. Here's a look at Group D-placed Argentina fixtures, schedule timetable with match dates and kick off times. 2018 FIFA World Cup Schedule in IST for PDF Download: Fixtures, Groups, Time Table with Matches in Indian Time & Venue Details of Football WC in Russia.

Football powerhouse La Albiceleste aka Argentina had a pretty eventful FIFA World Cup 2018 qualification and at one stage critics had all but written them off for a spot in Russia. The dependence on Lionel Messi was proving disastrous for a team with a galaxy of stars like Sergio Aguero, Gonzalo Higuain and Paulo Dybala. But the team as a whole failed to click, and this meant they were out of the automatic qualification places for most times during the CONEMBOL 2018 World Cup qualification campaign.

Enter, Jorge Sampaoli into the Argentinian fray and both the quality and destiny of the side changed with results certainly improving on the pitch. A Lionel Messi hat-trick against Ecuador in the final World Cup qualifier meant Argentina had finally grabbed a spot in Russia for the 2018 FIFA World Cup. It took three coaches and several combinations of players for last World Cup’s finalist to finally get rid of the darkest phase in its illustrious history. 2018 FIFA World Cup Group D Preview: Schedule Timetable With Match Dates, Venues & Kick-Off Times in IST of Argentina, Iceland, Croatia, and Nigeria in Football WC.

The main task for Jorge Sampaoli now is to decide his final 23, and that will need some tough decisions to be made. The likes of striker Mauro Icardi may not make the final cut with Sergio Aguero given preference over the Inter Milan striker. Paulo Dybala may somehow sneak through as a cover for Lionel Messi due to their similar playing styles. Finding the right center back partner for Nicolas Otamendi will also be on the top of the list of the Argentinian manager’s things to do. For this, Sampaoli has been seeing making frequent trips to Europe to gauge the form of his boys and get the troops ready for a long battle in Russia.

Argentina played 18 matches during the 2018 FIFA World Cup qualification from the South America region winning 7, drawing 7 and losing 4. They finished third and booked one of the automatic qualifying berth thanks largely to the brilliance of talismanic skipper Lionel Messi. They finished a disappointing 13 points adrift of group winners Brazil. The top scorer for Argentina during the qualification campaign was not surprisingly Lionel Messi who scored 7 goals while playing only 10 out his sides 18 matches. Such is the brilliance of the man that it will not be wrong to say he single-handedly turned the fortunes of his nation. Argentina is placed in Group D with Iceland, Nigeria and Croatia.

Argentina was the finalist in the last World Cup in 2014 in Brazil and were defeated by an extra time winner by Mario Gomez for Germany to break their hearts.

Lionel Messi: The Argentinian skipper is sometimes not adored or loved back home but one of football’s greatest players of all time gives more than a 100 percent when he is on the field representing his country. The pressure of carrying the team on his shoulder will once again be on the little maestro but he is by now well used to it. If Argentina are to go the distance, they will certainly need a happy Messi destroying oppositions with his skills.

Nicolas Otamendi: The defender has had a great season with Manchester City and his interception and a wide range of passing certainly makes him one of the most important players for Argentina at the World Cup. Argentina’s midfield may sometimes be overrun, and it will be the responsibility of Otamendi to keep things calm at the back for his nation.

(The above story first appeared on LatestLY on Jun 14, 2018 11:00 AM IST. For more news and updates on politics, world, sports, entertainment and lifestyle, log on to our website latestly.com).