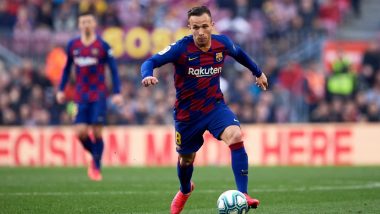 Juventus have agreed a transfer fee with Barcelona for the signing of Brazilian midfielder Arthur Melo. The 23-year-old, who joined Barcelona from Gremio in 2018, will join the Serie A champions at the start of next season. Arthur is expected to be in the starting line-up when Barcelona host Athletic Bilbao in La Liga 2019-20 on Tuesday. Both Barcelona and Juventus were already on talks for a player-swap deal involving Arthur and Bosnian midfielder Miralem Pjanic. But it seems Juventus are leaving no stones unturned and are ready to secure Arthur’s services by paying a transfer fee.  Barcelona vs Athletic Bilbao, La Liga 2019–20 Free Live Streaming Online & Match in Indian Time.

According to Sky Sports, the Serie A giants have agreed a £72.5million fee with Barcelona for the Brazilian midfielder despite earlier reports claiming that he had told both clubs of his disinterest in making a move to Italy. Maurizio Sarri sees the Brazilian as one he will like to build his team around for next season. The clubs have already been reported to have agreed on a transfer fee but Arthur is yet to decide his final destination and has also not met personal agreement with Juventus. Juventus Agree Player-Swap Deal With Barcelona Involving Miralem Pjanic and Arthur Melo: Report.

The report further states that the Brazilian will earn an annual salary of £4.5m which is at least £1.5m more than his current pay at Barcelona. Arthur was recently reported to have softened his stance on a possible transfer to Italy and even met Juventus director Fabio Paritici to negotiate his terms and possible role at the club.

Meanwhile, Barcelona are also in talks with Juventus for Pjanic but both clubs are yet to arrive on a deal. Reports suggest that Juventus are demanding £63.4m for the Bosnia & Herzegovina playmaker but Barcelona are of the feeling that he should be of a lower value given his age.

Both clubs are also rumoured to be finalising the deal and are expected to announce the transfer of both Arthur and Pjanic by June 30 although Juventus Sporting Director Paritici denied any such claims. “We have spoken frequently with Barcelona, but at this moment all the teams are playing important games, so we preferred to bypass this period,” he said. “It's not about June 30, before or after, but about finding an agreement between the various parties, and both players have to be convinced. Therefore, it's not an issue about dates."

(The above story first appeared on LatestLY on Jun 23, 2020 11:37 PM IST. For more news and updates on politics, world, sports, entertainment and lifestyle, log on to our website latestly.com).