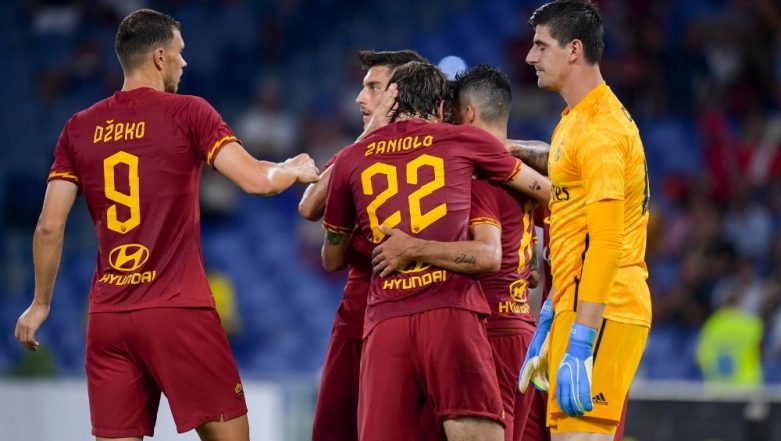 Rome, Aug 12: Real Madrid brought their pre-season to a poor close against Roma, battling to a 2-2 draw in regulation time and then ultimately losing to the Italians 4-5 in a penalty shootout. Real Madrid coach Zinedine Zidane put Gareth Bale into the line-up for the first time in the team's last four pre-season matches at the Stadio Olimpico on Sunday night. Man United Beat Chelsea 4-0! Harry Maguire 'World's Most Expensive Defender' Gives New-Look Manchester United Plenty of Cause for Optimism.

This was the Spanish team's seventh and last pre-season match before the start of the La Liga season next weekend when Madrid goes up against Celta Vigo, but Bale had played in only the first three outings, always coming off the bench, reports Efe news. Bale was back in the Madrid line-up against Roma, although he only played for the last 30 minutes or so, after all the regular-time goals had been scored and ultimately had little impact on the course of play. He did, however, hit his penalty shootout attempt. Barcelona Goalkeeper Neto Likely to Miss Opening La Liga Match Against Athletic Bilbao Due to Wrist Injury Sustained During Training Session.

Madrid's Marcelo drove a shot-on-goal home in the 16th minute with a great right-footer after a very nice drive, but Diego Perotti evened things up in the 34th minute, tapping one into the net following a premier effort by Nicolo Zaniolo. Casemiro put Madrid back in the driver's seat just five minutes later, heading the ball past the Italian goaltender after an assist from Marcelo, but Edin Dzeko brought things level once again just a minute later, capturing Cengiz Under's fine pass and knocking it into the top right corner of the net.

In the penalty shootout, Bale scored but Marcelo missed the very last of the 10 shots, his effort hitting the crossbar thus giving Roma the victory. The Italians kick off their Serie A season on August 25 going up against Genoa at home.