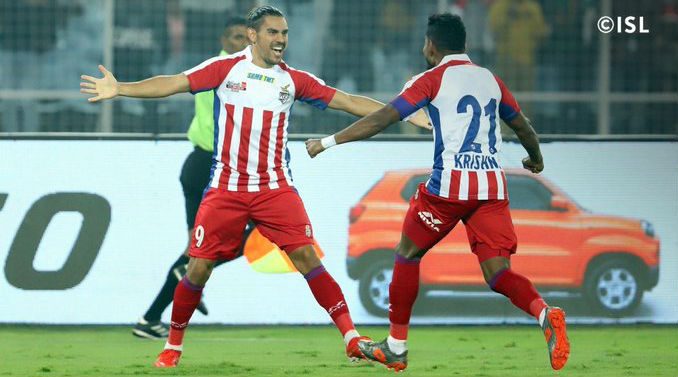 Kerala Blasters drew an end to their 9-match winless run in the massive 5-1 victory over Hyderabad FC and will be eager to continue that good run. Their forward duo of Messi Bouli and Bartholomew Ogbeche found the net against Hyderabad and coach Eelco Schattorie will hope that the pair can prove their consistency upfront. Kerala Blasters’ away run should, however, worry him. The Blasters have played 4, lost three and drew the other on the road in ISL 6. Atletico De Kolkata vs Kerala Blasters, ISL 2019–20 Match Preview: ATK Have Plenty at Stake Against Kerala.

For ATK, David Williams is a doubt after taking a knock in the 2-0 win over Mumbai City. His strike partner Roy Krishna is, however, on a scoring streak and will provide enough confidence to coach Antonio Habas against the two-time finalist. ATK will also welcome defender Agustin Iniguez, who misses the Mumbai City match due to suspension. ATK have been dominant at home this season and have once again turned it into a fortress. The former ISL champions have won three in four home matches.

ATK vs Kerala Blasters FC, ISL 2019-20, Dream11 Team Prediction: Goalkeeper – Arindam Bhattacharya (ATK) has shipped in just 9 goals in ISL 6 which is the second-lowest number of goals conceded so far this season. He should be the first choice.

ATK vs Kerala Blasters FC, ISL 2019-20, Dream11 Team Prediction: Forwards – Both teams have some of the best-attacking players at their disposal and therefore it is impossible all attacking talents. In this team, David Williams (ATK) who is a major doubt for the game due to injury has not been included. Roy Krishna (ATK), Bartholomew Ogbeche (KBFC) and Messi Bouli (KBFC) are three forwards.

ATK, despite their recent form, will they well to recall that they are winless in their last 5 matches against Kerala Blasters, which includes the 1-2 defeat on the opening encounter of ISL 6. Kerala Blasters have in recent times somehow managed to outplay their Kolkata rivals having earlier lost two finals against them. A win will be enough to send ATK into the top position while Kerala Blasters can cut down the 7-point with the top four with a victory.