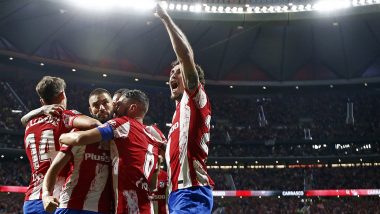 Madrid, May 9: Yannick Carrasco's first-half penalty gave Atletico Madrid an important win over neighbours Real Madrid in the city derby. The Belgian slotted home from the spot five minutes from time after Matheus Cunha had been caught by Jesus Vallejo to give his side three points on Sunday night, which takes them closer to assuring a place in next season's Champions League. With nothing to play for, Real Madrid made seven changes to the side that beat Manchester City on Wednesday night and it showed, especially in a disjointed first-half performance. Atletico Madrid 1-0 Real Madrid, La Liga 2021-22: Yannick Carrasco's Penalty Downs Champions (Watch Goal Video Highlights).

Antoine Griezmann went close twice for Atletico in the second half and Carrasco hit the post, while the only saves Jan Oblak made were long-range efforts from Fede Valverde and Marco Asensio, Xinhua reports. Jordi Alba scored a volley in the last minute of injury time to give FC Barcelona a 2-1 win away to fifth-place Betis that strengthened their second place in La Liga, dealing a blow to Betis' chances of finishing fourth. Ansu Fati's deflected goal opened the scoring in the 76th minute only for former Barca stopper Marc Bartra to head home and equalize three minutes later and for Alba to decide with a second left on the clock.

Granada climbed out of the bottom three with a 6-2 win away to Mallorca, who drop into the relegation zone. Luis Suarez struck for Granada in the sixth minute although Salva Sevilla's excellent goal levelled the score before halftime. Sergio Escudero and Antonio Puertas made it 3-1 before Antonio Raillo pulled a goal back for Mallorca, but two goals from Jorge Molina and one from Myrto Uzuni rounded off the rout. Getafe still have work to do before they certify their survival after they were held 0-0 at home to Rayo Vallecano, although the point edges them a point closer to safety. Robert Lewandowski Transfer News Update: Barcelona Receive Huge Boost In Bayern Munich Star's Pursuit.

Valencia frustrated Athletic Club Bilbao with a 0-0 in the San Mames Stadium. Thanks to Valencia keeper, Giorgi Mamardashvili, who twice denied Inaki Williams while Asier Villalibre rattled the crossbar in injury time. Villarreal missed a chance to strengthen their place in seventh as they were held 1-1 at home to Sevilla with Jules Kounde cancelling out Giovani Lo Celso's 85th-minute opener for Villarreal with the virtually the last action of the match in the fifth minute of injury time. The result leaves Sevilla needing just one point to assure a place in next season's Champions League, while Villarreal will think they deserved a lot more for their efforts.

Levante kept their survival hopes alive with a 2-1 win at home to sixth-place Real Sociedad, thanks to goals from Jorge Miramon and a Gonzalo Melero penalty in injury time. That result leaves Alaves bottom after they were hammered 4-0 away to Celta Vigo, with Iago Aspas scoring twice, along with Thiago Galhardo and a Ximo Navarro's own goal. Alvaro Negredo, Ruben Sobrino and Choco Lozano scored three goals in the last 10 minutes to give Cadiz a vital 3-0 win at home to Elche. Espanyol and Osasuna drew 1-1 with Nico Melamed cancelling out Kike Barja's opener for the visitors, who saw how Chimy Avila's powerful shot hit the Espanyol crossbar in the last minute of play.

(The above story first appeared on LatestLY on May 09, 2022 02:49 PM IST. For more news and updates on politics, world, sports, entertainment and lifestyle, log on to our website latestly.com).