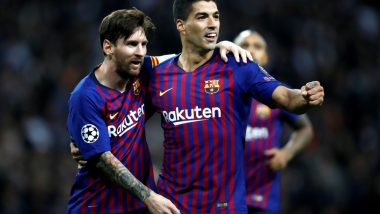 After Real Madrid and Juventus crashing out of the Champions League 2019-20 match, it's time for yet another Round of 16. Barcelona will take on Napoli at the Camp Nou. The fans are keeping their fingers crossed for the Catalan Giants as the team announced a 22-member squad for the game. The team is looking to seal a berth in the round of eight and in the reverse fixture the two teams ended up with 1-1. This the worst possible time for the Catalan Giants to head into the UCL fixture as things have been quite unwell in the Barcelona camp. Rebellion Against Lionel Messi in Barcelona Camp as Team Heads for Champions League 20019-20?

The whispers of Lionel Messi quitting the club are getting louder with each passing day. The rumour mills have also churned out the goss from the club that the players have risen in rebellion against Lionel Messi. He has already had a fall out with Antoine Greizmann and the three mid-fielders. The players are unhappy with the club and Messi of course. In these moments, the teams head to play the fixture against Napoli. Now, let's have a look at the squad declared by Barcelona.

(The above story first appeared on LatestLY on Aug 08, 2020 01:08 PM IST. For more news and updates on politics, world, sports, entertainment and lifestyle, log on to our website latestly.com).