The Catalan giants had defeated Villarreal 3-1 earlier this season. The Yellow Submarine would now aim to settle the scores and also secure a spot for playing European football next season. 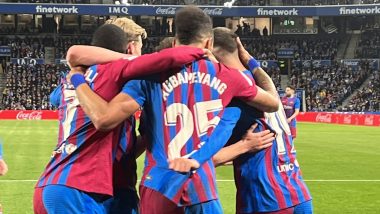 Barcelona will aim to finish off on a high which has been a season of highs and lows when they face Villarreal in La Liga 2021-22 on Monday, May 23. The match would be played at Camp Nou and is scheduled to get underway at 1:30 am IST (Indian Standard Time). The Catalan giants have had a topsy-turvy season where they started off poorly. But then they recovered and looked set for greater things. Eventually, another slump in form kept them out of the title race. They have now secured the second spot on the points table and would be aiming to bounce back harde next year. Frenkie de Jong Transfer News: Manchester United Unwilling To Match Barcelona's Asking Fee

Villarreal on the other hand, are seventh on the points table and would require a victory to qualify for European football next season. Their confidence would not be too high as enter this clash on the back of a defeat to Real Sociedad. Barcelona on the other hand, played out a goalless draw against Getafe in their last game.

How to Watch Live Telecast of Barcelona vs Villarreal, La Liga 2021-22 Football Match?

Viacom18 have acquired the broadcasting rights of La Liga in India for three seasons, so fans can tune into the MTV channel to catch the Barcelona vs Villarreal live action on their television sets.

Where to Get Free Live Streaming Online of Barcelona vs Villarreal, La Liga 2021-22 Football Match?

La Liga 2021-22 will also be available on online platforms for Indian viewers. With Viacom18 being the official broadcasters, fans can tune into Voot and Jio online platforms to watch the live streaming of the Barcelona vs Villarreal clash.

(The above story first appeared on LatestLY on May 22, 2022 08:55 PM IST. For more news and updates on politics, world, sports, entertainment and lifestyle, log on to our website latestly.com).