Manchester United have shown their interest in signing Frenkie de Jong from Barcelona, However, the club are not willing to spend an excessive amount of money on the Netherlands international. 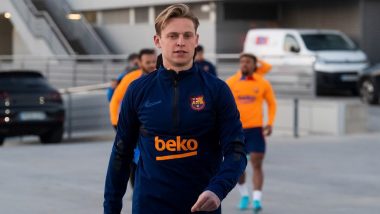 Manchester United had a disappointing season and are looking to build a strong team to compete at a higher level in the next campaign. They have appointed Erik ten Hag as the new manager. And with the arrival of the Dutchman, the Red Devils are strongly linked with the transfer of Barcelona midfielder Frenkie de Jong. Manchester United Set to Complete Frenkie de Jong Transfer From Barcelona.

According to a report from Daily Mirror, Manchester United have shown their interest in signing Frenkie de Jong from Barcelona, However, the club are not willing to spend an excessive amount of money on the Netherlands international.

It is understood that Barcelona value the midfielder at £70million and want Manchester United to match that in order to sign him. However, the Premier League outfit are not too keen on breaking the bank on the 23-year-old Dutch international.

Erik ten Hag will have a limited budget to work in the summer after the club missed out on Champions League qualification and the revenue that comes with it. Amidst this, United have made it clear to Barcelona and De Jong's representatives that they will not be able to commit to such a high transfer fee.

Frenkie de Jong has been one of the best players at Barcelona in recent years. But with the club recovering from huge debt and working under strict financial restrictions, they are looking to sell the midfielder in order to generate funds and balance the books.

Barcelona are hoping to recoup the £65million they paid to Ajax for the midfielder. However, with Manchester United unwilling to match the demands, a compromise could be made. Erik ten Hag knows the players well during their time together at Ajax.

(The above story first appeared on LatestLY on May 19, 2022 07:47 PM IST. For more news and updates on politics, world, sports, entertainment and lifestyle, log on to our website latestly.com).