Bukayo Saka Slams Social Media Platforms in a Powerful Letter, Feels That They Are Not Doing Enough to Stop Racism 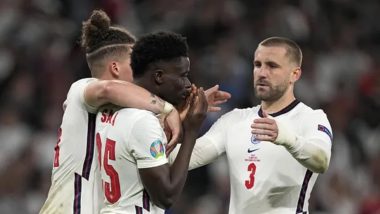 Bukayo Saka missed a penalty in the finals of the Euro 2020 against Italy and was subjected to racist comments not only at the Wembley stadium but also on social media. Saka along with Marcus Rashard and Jadon Sancho were subjected to many racist comments post this. the three players missed penalties during the finals of the contest and with this, Days after the incident, the English midfielder took to social media and reacted to the same. According to him, social media platforms are not doing enough to curb racism. Jadon Sancho Sends Out Strong Message to Racist Trolls Post Euro 2020 Debacle, Says ‘Hate will Never Win’ (Check Post).

He urged these platforms to do enough so that no child or a man could receive a racist comment ever. Saka in the note further said racism has no place in any area of society. "To the majority of people coming together to call out the people sending these messages, by taking action and reporting these comments to the police and by driving out the hate by being kind to one another, we will win," read a part of the note. He also apologised to the fans for missing out on a penalty.

Even Jadon Sancho reacted to the incident on Thursday by putting up a post on social media, He called out to the ones who passed racist comments and said that hate can never win. Marcus Rasford's mural was also destroyed by fans. Many supporters gather at the mural after it defaced and pasted messages for the Manchester United striker.

(The above story first appeared on LatestLY on Jul 16, 2021 08:46 AM IST. For more news and updates on politics, world, sports, entertainment and lifestyle, log on to our website latestly.com).