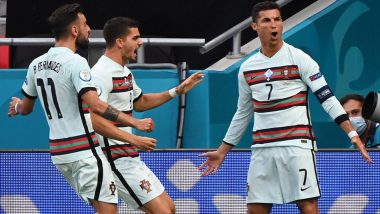 With a brace, last night against Hungary, Cristiano Ronaldo's name emerged as one of the top trends on social media. With this, he went on to be the all-time top-scorer in the UEFA Euro Cup. He has scored 11 goals in the Euro Cup and has even surpassed Michel Platini. Ronaldo scored a brace last night against Hungary and also led the team to a 3-0 win. The five-time Ballon d'Or award winner scored a goal at the 87th minute by converting a penalty into a goal and then chipped in with yet another one at the 92nd minute of the match. Cristiano Ronaldo's Brace Leads Portugal to 3-0 Win Over Hungary in Euro 2020.

Talking about the game at the Puskas Arena, Portugal dominated every aspect of the match as he dominated the possession by 70 per cent and implemented 671 passes during the game. Out of the 11 shots taken by the team, seven of them ended up being on target. The passing accuracy for the winning team was 88 per cent as opposed to the home team who had 75 per cent.

Now, let's have a look at the goal highlights of Ronaldo's goals below:

Raphael Guerreiro was the one, who started off with a goal for Portugal in the dying minutes of the match. He scored a goal at the 84th minute of the game and then Ronaldo chipped in with a couple of them. The fans also could not stop praising Ronaldo on social media and they are praising him as the GOAT.

(The above story first appeared on LatestLY on Jun 16, 2021 09:29 AM IST. For more news and updates on politics, world, sports, entertainment and lifestyle, log on to our website latestly.com).