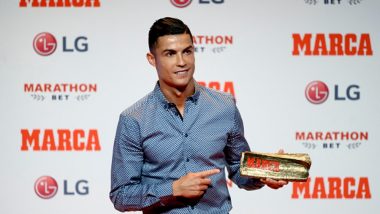 Breaking records and collecting trophies seem to be a daily business for five-time Ballon de Or winner Cristiano Ronaldo. Now, CR7 has been honoured with MARCA Leyenda Award in Madrid. The award was given by MARCA director Juan Ignacio Gallardo at the Teatro Reina Victoria in Madrid. It was awarded to him for his successful career as a professional footballer and standing attended by him across the world. Post receiving the honour, CR7 said that he hopes to return to Madrid soon.

With this, he joins the elite list of people like Rafael Nadal, Michael Jordan, Michael Phelps, Marc Marquez, Pau Gasol, Miguel Indurain, Usain Bolt and Roger Federer who have received this honour. "This trophy will be in a very nice place in my museum. Madrid is special, I travel a lot but there are few cities like Madrid. Much of this award is derived from what I did in Madrid. It is a Spanish trophy and leaves me very honoured. Thanks to all those who have helped me to achieve it. It is a pride for me. And I hope to return to Madrid soon,” said CR7 after receiving the honour.

The pictures and video of the event were shared by many fan pages on social media. Check them out below:

⭐ @Cristiano: “A big part of this award owes to what I did at @realmadriden.”#HalaMadrid

Posing with the award.

Video of CR7 receiving the honour.

During the question and answer session, Ronaldo also said that he misses Real Madrid more than Manchester United “Madrid is special; I travel a lot but there are few cities like Madrid. Much of this award is derived from what I did at [Real] Madrid,” he further added. Ronaldo got transferred to Juventus for reportedly a whopping fee of 112 million euros. He also has enjoyed a great season at Serie A last year as CR7 played a vital role in the team remaining unbeaten throughout the season. Out of the 31 matches played by the former Manchester United player for the Italian club, he scored 21 goals and would surely want to continue to be at the top of his game in the upcoming season.

(The above story first appeared on LatestLY on Jul 30, 2019 11:55 AM IST. For more news and updates on politics, world, sports, entertainment and lifestyle, log on to our website latestly.com).