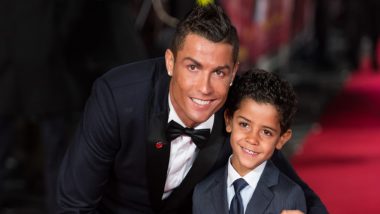 Cristiano Ronaldo Junior has surely inherited football skills from his father. On many occasions, the eight-year-old has shown his football skills and has even won matches for the junior team of Juventus. Like his father, even Cristiano Ronaldo junior is quite particular when it comes to his practice and fitness. The eight-year-old spends most of his time practising the sport. Now, in a recent video floating on social media, CR7 juniors are seen scoring a couple of goals at the backyard of his house. Watch Video: Cristiano Ronaldo Smiles Ear to Ear as His Son Scores a Stunning Goal.

The goals will surely make his father proud of his skills. CR7 was spotted wearing seven number jersey as he scored the goals and the clip was shared on social media and the netizens further circulated the video. Ronaldo’s son joined the Juventus academy last year where he had scored a couple of goals and let Juventus Youth Team to a 7-1 victory. Check out the video below:

This is not the first time that CR7 has exhibited his football skills. Ahead of 2018 FIFA World Cup, he was seen hitting the ball into the nets. The clip was shared on the official account of Portugal and was captioned, “The final whistle doesn't mean the show is over. Cristiano and his son, it's clear the apple doesn't fall far from the tree! #ConquerYourDream.” The five-time Ballon de’ Or winner while speaking about his son had said that CR7 junior is adapting to Juventus quite well

(The above story first appeared on LatestLY on Jul 20, 2019 10:42 PM IST. For more news and updates on politics, world, sports, entertainment and lifestyle, log on to our website latestly.com).