Cristiano Ronaldo recently walked away with the Best Player of the Year Award 2019 in Dubai. 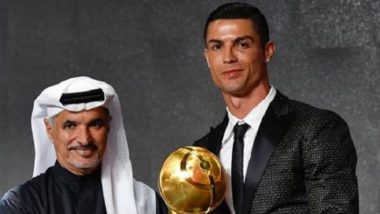 Cristiano Ronaldo recently walked away with the Best Player of the Year Award 2019 in Dubai. He went on to beat his contemporary Lionel Messi to walk away with the gong. The Juventus forward was accompanied by his son Cristiano Ronaldo Jr and girlfriend Georgina Rodríguez. While receiving the trophy, he took a sly dig at FIFA who preferred Mohamed Salah for the Puskas Award 2018 for Best Goal of the Season ahead of Ronaldo. He reportedly went on to say that he would have won the award if the FIFA executives knew more about football. Cristiano Ronaldo Goes for a Late Night Run in Dubai with CR7 Junior (Watch Video).

“I see that those who understand this sport realize how hard it is to score a goal such as this one," Ronaldo said. "I have scored nearly 700 goals in my career, and that one is by far the best. The only downside is that I scored it against my current team,” he further said. Cristiano Ronaldo Beats Lionel Messi; Wins Best Player of the Year at the 2019 Globe Soccer Awards for the Third Time! (See Pics and Video)

Ronaldo’s bicycle kick against Juventus during the UEFA Champions League was the most applauded one. The goal was touted to be one of the best goals of the season by many football experts. CR7 was hailed for the same at Juventus stadium for the same. The year 2018 has been great for the former Real Madrid player as he finished the season with 49 goals, just two behind his contemporary Lionel Messi. As of now, the football star is enjoying his time in Dubai with his family.

(The above story first appeared on LatestLY on Jan 05, 2019 09:23 PM IST. For more news and updates on politics, world, sports, entertainment and lifestyle, log on to our website latestly.com).