Breaking records and creating new ones seems to be a regular business for Juventus forward Cristiano Ronaldo. 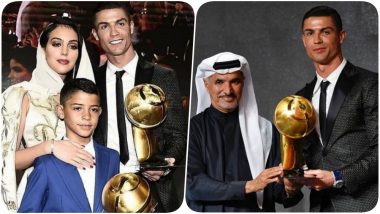 Breaking records and creating new ones seems to be a regular business for Juventus forward Cristiano Ronaldo. This time Ronaldo went on to beat his competitor Lionel Messi and won the Best Player of the Year at the 2019 Globe Soccer Awards. This is the third time that he has won the award the ceremony happened yesterday in Dubai. The footballer has had a ball of a time in Juventus and has scored 14 goals till date for his new club. Cristiano Ronaldo Goes for a Late Night Run in Dubai with CR7 Junior (Watch Video).

Ronaldo was accompanied by his girlfriend Georgina Rodríguez and his son Cristiano Ronaldo Jr. The former Real Madrid player is enjoying his three-week-long winter break in Dubai. He also celebrated the New Year’s Eve with his family in Dubai and is been enjoying helicopter rides in the city. Several pictures and videos surfaced on the Internet which showed CR7 having a great time in Dubai. Lionel Messi and Cristiano Ronaldo Celebrate New Year’s Eve With Families (See Pics).

Talking about the ceremony, CR7 shared a few pictures of the event on social media. “What better way to start the new year. Thanks for the appreciation and the care that I have received today.👌🏽👌🏽👌🏽,” read the caption of the first pic.

What better way to start the new year. Thanks for the appreciation and the care that I have received today.👌🏽👌🏽👌🏽

Ronaldo arrives at the ceremony with Georgina and CR7 Junior.

Georgina cheers for the footballer.

Ronaldo poses with the trophy.

Ronaldo‘s agent Jorge Mendes was given the agent of the year honour in Dubai. Globe Soccer Awards is thought to be the third-most prestigious football award ceremony in the world after FIFA's The Best and the Ballon d'Or.

(The above story first appeared on LatestLY on Jan 04, 2019 01:56 PM IST. For more news and updates on politics, world, sports, entertainment and lifestyle, log on to our website latestly.com).