Blind also suffers from heart problems and couldn't hold back his tears when he was subbed off during Netherlands 3-2 win over Ukraine on Sunday. He had played together with Eriksen at Ajax. 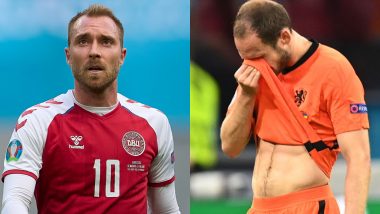 Daley Blind, one of Netherlands' seasoned defenders, had reportedly decided to opt-out of his side's Euro 2020 opening match against Ukraine after Denmark midfielder Christian Eriksen suffered a cardiac arrest and had collapsed on the field, on Saturday. During the Group B fixture between Denmark and Finland, the 29-year had collapsed on the field minutes before half-time. It was due to prompt action taken by his teammates, match officials and medical professionals present at the ground, that the Inter star regained consciousness and left the ground in a stable state. Christian Eriksen Health Update: Demark Midfielder Was 'Gone' After Suffering Cardiac Arrest, but We Got Him Back, Says Danish Doctor Morten Boesen

Blind also suffers from heart problems and couldn't hold back his tears when he was subbed off during Netherlands 3-2 win over Ukraine on Sunday. He had played together with Eriksen at Ajax.

"Yesterday had a huge impact on me, never mind the fact that I know Christian well as a friend," he said. The defender was diagnosed with a heart muscle inflammation two years ago after he felt dizziness during a Champions League fixture against Valencia. He had also collapsed last year during a friendly for Ajax against Hertha Berlin.

"The situation for him is terrible. Of course, I have also experienced a few things in that area, so that I had to overcome a mental hurdle to play today," he added. The 31-year old also has a pacemaker attached to him which treats his dangerously abnormal heart rhythms.

I had to persuade myself to play but I’m proud that I did and that’s why my emotion came bursting out at the end of the game," Blind said, adding, "I definitely thought about not taking part. The images on television and the incident had a big impact and I didn't sleep very well because of them. I really had to overcome a big hurdle to do this."

The fact that Eriksen was alive and stable, helped Blind get the composure to decide to play the match. Talking about his decision, he said, "If it didn't go well, it would have haunted my head even more. When Christian encouraged his own teammates to play is when I decided to play myself. Also because I'm safe, according to the doctors."

(The above story first appeared on LatestLY on Jun 14, 2021 03:05 PM IST. For more news and updates on politics, world, sports, entertainment and lifestyle, log on to our website latestly.com).