Eden Hazard has been sidelined since early February due to a muscle injury but has recently returned to training, suggesting he might be close to a comeback. Zinedine Zidane in a recent interview stated that the Belgian is not yet 100 per cent and will return once fully fit. 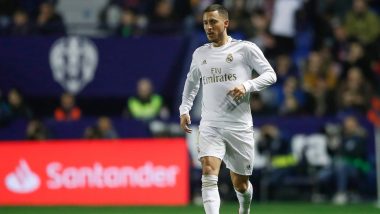 Real Madrid are set to receive a huge injury boost as star man Eden Hazard could soon return to first-team training. The Belgian superstar, who joined the record Spanish champions in 2019, has been plagued with injuries during his time at Los Blancos but could still play a huge role in the remainder of the season as Zinedine Zidane’s men battle for Champions League and domestic leagues title. Atletico Madrid 1–1 Real Madrid, La Liga 2020–21 Goal Video Highlights.

Eden Hazard has been sidelined since early February due to a muscle injury but has recently returned to training, suggesting he might be close to a comeback. According to Diario AS, the winger’s recovery is on track and could feature in the weekend league game against Elche with the Champions League clash against Atalanta in mind.

It is understood that Real Madrid want the 30-year-old to return to first-team set-up as soon as possible but are aware that any rush might result in the winger suffering another relapse on his injury. The second leg of the Champions League tie against Atalanta next week could be a keynote match for the star.

Zinedine Zidane in a recent interview stated that the Belgian is not yet completly fit and will return once fully recovered. ‘There is no relapse. We want him to be 100 percent when he can return. This is what he is doing, little by little, without haste. It is important that, when he returns, he feels strong and 100 percent,’ said the Madrid boss.

Eden Hazard had started in four of Madrid’s six games prior to his injury – although in none of them has he completed the full 90 minutes – which was sustained at the start of February. Injuries have limited the Belgian from making the desired impact in the Spanish capital, scoring just three goals in his last 13 games.

(The above story first appeared on LatestLY on Mar 09, 2021 09:23 PM IST. For more news and updates on politics, world, sports, entertainment and lifestyle, log on to our website latestly.com).