Igor Angulo did not take much time registering goals for FC Goa with a brace against Bengaluru in the previous game. His positioning throughout the game was brilliant and this is where an underconfident Mumbai team could struggle. Edu Bedia and Lenny Rodrigues complement each other well in midfield 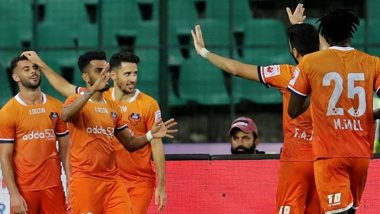 It is early days in the 2020/21 Indian Super League but Mumbai City FC, who lost their first game of the season against NEUFC, cannot afford to fall further behind. The Islanders have their next game against one of the giants in the league – FC Goa, which can be a bit tricky. The game Mumbai City FC boss Sergio Lobera clash with his former team Goa, where he had to leave following issues with the management. While he is known to set up a team for attack, defense is an area of weakness that needs taking care of. Opponents Goa started with a draw against Bengaluru but a win should propel them high up the points table. FC Goa versus Mumbai City FC will be telecasted on the Star Sports network and streamed on Hotstar from 7:30 pm IST. FCG vs MCFC Head-to-Head Record.

Igor Angulo did not take much time registering goals for FC Goa with a brace against Bengaluru in the previous game. His positioning throughout the game was brilliant and this is where an underconfident Mumbai team could struggle. Edu Bedia and Lenny Rodrigues complement each other well in midfield with the latter assuming a more defensive role. Ivan Gonzalez needs to command the backline more convincingly. He seemed to be lacking match sharpness and will look for a turnaround this evening. FCG vs MCFC Dream11 Team Prediction in ISL 2020–21.

The big news coming in from the Mumbai City FC camp is the suspension of star midfielder Ahmed Jahouh, whose rash lunge saw him receive a straight red. The Moroccan player has also been cautioned by AIFF for exemplary action in the event of a repeat of the incident. Raynier Fernandes and Adam le Fondre need to be involved much for the Islanders if they are to break down their opposition.

FC Goa vs Mumbai City FC match in ISL 2020-21 will take place on November 25 (Wednesday). The match will be played at the Fatirdat Stadium in Margao and it is scheduled to start at 07:30 pm IST (Indian Standard Time).

Those unable to follow the FC Goa vs Mumbai City FC match on television can also follow the game online. Disney+Hotstar, the OTT of Star Network, will be live streaming the FCG vs MCFC online for its fans in India. JIO subscribers can also follow the match live on JIO TV. Mumbai City will struggle to keep pace with Goa’s fine passing game and could end with a second defeat in as many games.

(The above story first appeared on LatestLY on Nov 25, 2020 12:55 PM IST. For more news and updates on politics, world, sports, entertainment and lifestyle, log on to our website latestly.com).