Mumbai City FC had a disappointing start to their ISL 2020-21 season as they were defeated by NorthEast United. Sergio Lobera’s team will be looking to record their first win in the competition against his former employers. Meanwhile, FC Goa came back from two goals down against Bengaluru FC to earn an equal share of points. 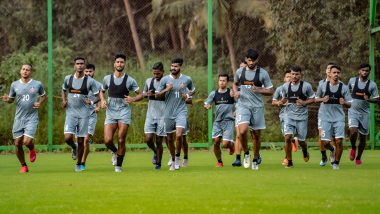 FC Goa (FCG) and Mumbai City FC (MCFC) face each other in the latest round of fixtures in Indian Super League 2020-21. The clash will be played at the Fatorda Stadium in Margao, Goa on November 25, 2020 (Wednesday). The teams have met each other 14 times in the competition and The Gaurs lead the head-to-head record with seven wins compared to the Islanders four with remaining matches ending in a draw. Goa have also won four of the last five fixtures between the two sides. Indian Super League 2020–21 Points Table Updated.

Mumbai City FC had a disappointing start to their ISL 2020-21 season as they were defeated by NorthEast United. Sergio Lobera’s team will be looking to record their first win in the competition against his former employers. Meanwhile, FC Goa came back from two goals down against Bengaluru FC to earn an equal share of points. So before the two teams take each other on, we take a look at the results of the last five encounters between them. FCG vs MCFC Dream11 Team Prediction in ISL 2020–21.

Mumbai City FC took an early lead in the game through Rowlin Borges but the Guars turned the game around as goals from Ferran Coronimas, Hugo Boumous and Jackichand Singh gave the home sie 3-1 lead. Rafique and Coronimas scored on either side of Bipin’s goals in the second half to complete a dominating performance.

FC Goa were brilliant in this clash but had to work hard for all three points. Lenny Rodrigues and Ferran Coronimas gave the Gaurs a 2-0 lead in the game but second-half goals from Souvik Chakrabarti and Sarthak Golui got the Islanders on level terms. However, strikes from Hugo Boumous and Pena gave the visitors a crucial win.

After losing the first leg 5-1, the Islanders needed a miracle to make it into the finals of ISL 2018-19. They got off to a great start as Rafael Bastos scored in the sixth minute but then were unable to add to that scoreline. Mumbai won the match but were unable to qualify for the finals because of a 5-2 aggregate defeat.

The first leg of ISL 2018-19 semi-finals ended with a dominating win for the away side. Rafael Bastos opened the scoring for Mumbai but the attacking prowess of Goa proved too much as the Islanders succumbed to an embarrassing defeat. Defender Mourtada Fall scored a brace for the Gaurs. Jackichang Singh, Ferran Corominas and Brandon Fernandes were the other scorers.

This match saw another dominating performance by the Gaurs away from home. They dominated the game from the start and their efforts were rewarded when Edu Bedia scored in the 28th minute. Ferran Corominas sealed the win for the away side with a late penalty. FC Goa managed a total of 24 attempts in this game.

(The above story first appeared on LatestLY on Nov 25, 2020 12:44 PM IST. For more news and updates on politics, world, sports, entertainment and lifestyle, log on to our website latestly.com).