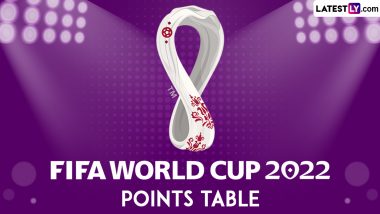 Argentina kept alive their hopes of making it to the round of 16 with a 2-0 win over Mexico on Sunday, November 27. With this result, they also moved from the bottom of Group C points table to the second spot, behind leaders Poland, who had earlier beaten currently third-placed Saudi Arabia. Mexico, with this loss, are at the bottom of the table. Earlier, Kylian Mbappe helped France become the first team to qualify for the round of 16 with a 2-0 win over Denmark. Christian Eriksen's side, who are third on the Group D table, now need to win their last game against Australia to keep alive their round of 16 hopes. Earlier, Australia won their match against Tunisia. The 22nd edition of the competition is being held in the Middle East region of Asia after going through a lot of controversies. Where To Watch FIFA World Cup 2022 Online? Go to FIFA+ for Live Scores and Fixtures!

A total of 32 teams from five continents will clash with each other as they aim to clinch the title of the World Champions at the end of the tournament. Although fan favourites Brazil, Argentina, Portugal, Spain, and Germany made their place in the group stages of the FIFA World Cup, Italy once again will miss the opportunity to showcase their football talents on the biggest stage. On the other hand, the Netherlands, after missing out on qualification in the last edition, will compete in for the title this time. Meanwhile, you can check the updated FIFA World Cup 2022 points table below. FIFA World Cup 2022 Schedule for Free PDF Download Online: Get Football Fixtures, Time Table With Match Timings in IST and Venue Details.

Since 1998, 32 teams can qualify for the FIFA World Cup finals at the end of a two-year-long qualification process involving the 211 men's national football teams affiliated to FIFA. It is no different in Qatar. Thirteen teams from UEFA joined Five teams from CAF, four teams from AFC, three teams from CONCACAF and two qualifiers from the intercontinental play-off from AFC and CONCACAF to complete the eight groups.

The group stage of the FIFA World Cup 2022 will be played in a round-robin format between the four members of each of the eight groups. A win in each match earns three points in the points table of the group stage of the FIFA World Cup 2022. A draw will yield both the playing teams one point. Top two teams from either group based on the most number of points gathered on the points table, will make it through to the Round of 16 of the premier football championship of 2022.

(The above story first appeared on LatestLY on Nov 20, 2022 03:46 PM IST. For more news and updates on politics, world, sports, entertainment and lifestyle, log on to our website latestly.com).