With a healthy five-point lead over Atletico Madrid in the points table, a positive result means Barcelona will finish the season second. This is massive considering they looked dead and buried outside the top eight when Ronald Koeman was sacked. 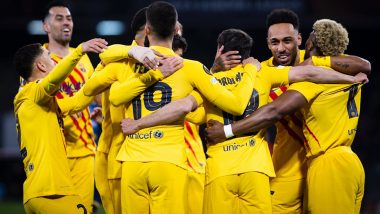 FC Barcelona may have steadied their sinking ship under the management of Xavi but will end the season without a trophy. They face Getafe in the league with their immediate goal of Champions League qualification achieved. With a healthy five-point lead over Atletico Madrid in the points table, a positive result means Barcelona will finish the season second. This is massive considering they looked dead and buried outside the top eight when Ronald Koeman was sacked. Xavi has done a remarkable job in helping the side adopt a brand of football but their precarious financial situation means next season will not be easy. There is a chance they might lose key players and that could put the rebuild in jeopardy. Getafe versus FC Barcelona will be streamed on Voot app from 11:00 PM IST. Cesc Fabregas Confirms Monaco Departure at the End of a Injury-Ravaged Season

Stefan Mitrovic is suspended for the game against Barcelona after receiving his marching orders against Osasuna. Gaston Alvarez is his likely replacement and will be inducted into the back three. Enes Unal, the talented Turkish striker, will hope his midfield creates enough opportunities for him and fellow forward Borja Mayoral. Mauro Arambarri in midfield has his task cut out against a technically sound Barcelona side that dominate possession.

Barcelona have a host of injury issues with Sergino Dest, Gerrard Pique, Ronald Araujo and Eric Garcia all missing. Memphis Depay will continue in the second striker role with Pierre Emerick Aubameyang as the no 9. Ousmane Dembele, whose future is up in the air, will start on the wings. Gavi and Sergio Busquets in the middle make the team tick with their effective passing range.

How to Watch Live Telecast of Getafe vs Barcelona, La Liga 2021-22 Football Match?

Viacom18 have acquired the broadcasting rights of La Liga in India for three seasons, so fans can tune into the MTV channel to catch the Getafe vs Barcelona live action on their television sets.

Where to Get Free Live Streaming Online of Getafe vs Barcelona, La Liga 2021-22 Football Match?

La Liga 2021-22 will also be available on online platforms for Indian viewers. With Viacom18 being the official broadcasters, fans can tune into Voot and Jio online platforms to watch the live streaming of the Getafe vs Barcelona clash.

(The above story first appeared on LatestLY on May 15, 2022 04:39 PM IST. For more news and updates on politics, world, sports, entertainment and lifestyle, log on to our website latestly.com).