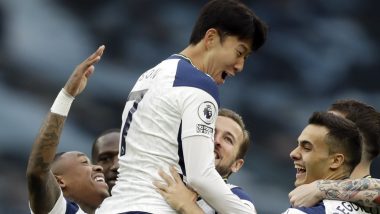 Harry Kane and Son Heung-min have surely sent the Tottenham Hotspurs fans smiling from ear-to-ear in the Premier League 2020 tie against West Ham United. The two scored an early goal and within the first eight minutes, the Tottenham Hotspur’s scoreline read 2-0.  England captain Harry Kane added yet another goal to the kitty at the 16th minute and the netizens could not contain their excitement as the scoreline read 3-0. Needless to say that the hosts were in a commanding position with the two players from Tottenham giving out their best. The Internet went berserk posting tweets on social media and they hailed Kane and Son for the kind of a rapport they have. This also included the official account of the Premier League who praised the duo with a caricature from Shah Rukh Khan and Anushka Sharma’s film ‘Jab Harry Met Sejal’. Tottenham Hotspurs vs West Ham United, EPL 2020: Check Out Playing XI For TOT vs WHU at Tottenham Hotspur Stadium

The official account of the Premier League posted a caricature with Harry Kane and Son Heung- min in the artwork.  The post also had text which read, "Jab Harry Met Son." The artwork was shared on social media and the caption of the tweet read, "Name a better duo in the #PL." They also used a trending hashtag #TOTvsWHU."The hosts have dominated the match with 60 per cent of ball possession and the remaining 40 per cent with West Ham United.  Now, let's have a look at the tweet below:

Kane had provided with four assists to Son against Southampton. Harry Kane now tops the list of most goals in the Premier League with 17 nets from 19 appearances. Heung-Min Son stands on number two with 16 goals from 25 appearances.

(The above story first appeared on LatestLY on Oct 18, 2020 09:52 PM IST. For more news and updates on politics, world, sports, entertainment and lifestyle, log on to our website latestly.com).