Arsenal are up against Villarreal in the second leg of the UEFA Europa League 2020-21 semi-final tie. The knock-out fixture takes place at the Emirates Stadium on Friday midnight (May 7). Both teams have been inconsistent this season and would be raring to win this game. 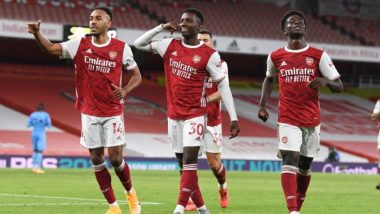 Arsenal are up against Villarreal in the second leg of the UEFA Europa League 2020-21 semi-final tie. The knock-out fixture takes place at the Emirates Stadium on Friday midnight (May 7). Both teams have been inconsistent this season and would be raring to win this game. Villarreal have been far away from their best lately and might lose out on European football this year. On the other hand, Mikel Arteta’s men have also endured a disappointing season but a Europa League title can redeem them. Meanwhile, fans can scroll down to get the live streaming, live telecast and other ARS vs VIL match details. Mikel Arteta is Going to Bring a Lot of Stability to Arsenal: Alexandre Lacazette.

Notably, Villarreal hold a massive advantage in this fixture as the Spanish club won the first leg 2-1. Manu Trigueros stunned the Premier League club by opening the scoring only in the fifth minute. Villarreal’s lead was extended in the 29th minute as Raul Albiol also found the nets. Having gained a 2-0 lead, Villarreal kept things tight in the remaining of the game. However, Nicolas Pepe converted a goal in the second half to reduce Arsenal’s burden ahead of the second leg. As the crucial fixture takes a countdown, let’s look at the streaming and other information. ARS vs VIL Dream11 Prediction in UEFA Europa League 2020–21: Tips To Pick Best Fantasy XI.

Arsenal vs Villarreal match in the first leg of UEFA Europa League 2020-21 semi-final will be played at the Emirates Stadium on May 07, 2021 (Friday). The game is scheduled to begin at 12:30 am IST (Indian Standard Time).

Fans in India can live telecast the Arsenal vs Villarreal semi-final match on Sony Sports channels. Sony Pictures Sports Network (SPSN) is the official broadcaster for UEFA Europa League 2020-21 in India. So Fans can tune into Sony Ten/ Sony SIX SD and Sony Ten/ Sony SIX HD channels to catch the live-action of the UEL match.

Where to Get Free Live Streaming Online of Arsenal vs Villarreal UEFA Europa League 2020-21 Semi-Final Match?

Those unable to follow the match live on television can watch the Arsenal vs Villarreal semi-final clash online. SonyLiv, the OTT of Sony Network, will be live streaming the first leg of the semi-final match online for fans in India.

(The above story first appeared on LatestLY on May 06, 2021 11:46 PM IST. For more news and updates on politics, world, sports, entertainment and lifestyle, log on to our website latestly.com).