Inter Milan vs Getafe, UEFA Europa League 2019–20: Lautaro Martinez, Jaime Mata and Other Players to Watch Out in INT vs GEF Football Match 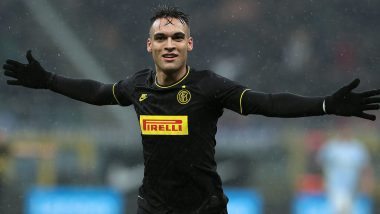 Getafe finished eighth in the La Liga 2019-20 points table after running for a European place throughout the season. Their last win the Spanish league, after it resumed in June, came against Real Sociedad and since then they have lost four of their last six matches with four defeats and two draws.  Lionel Messi Transfer News Update: Inter Milan Ready To Offer Barcelona Superstar Staggering Deal Worth £235 million.

They will, however, be confident in the UEFA Europa League having beaten Dutch heavyweights Ajax in the previous round. Getafe have also kept four clean sheets in eight matches in the Europa League this season.

Former Manchester United striker, Romelu Lukaku has been in fine form since the season restart. He scored 23 goals in the Serie A this season and finished third in the league golden boot race behind Ciro Immobile (36) and Cristiano Ronaldo (31). He scored in both the legs against Ludogorets in the previous round and will be confident of finding the net against the Spanish opposition.

The 31-year-old is Getafe’s highest goalscorer in La Liga 2019-20 with 11 strikes this season. He also found the net three times in six games in the Europa League. With the competition now one match encounters, Getafe will want their in-form striker to be in good touch and find the net against Inter Milan.

He will certainly start beside Lukaku at the two strikers for Inter Milan. Martinez, who has been continuously linked to Barcelona throughout this summer, scored 14 goals in the recently concluded Serie A season helping Inter finish third in the league. He, along with Lukaku will be key as Inter Milan aim for some silverware this season.

(The above story first appeared on LatestLY on Aug 05, 2020 06:32 PM IST. For more news and updates on politics, world, sports, entertainment and lifestyle, log on to our website latestly.com).