NorthEast are without a win in four matches and find themselves at the sixth spot with 10 points after eight games. Bengaluru's attempts to build up play patiently in the opening minutes were thwarted by NorthEast's aggressive press. But clear-cut chances were few and far between for both teams in the first half. 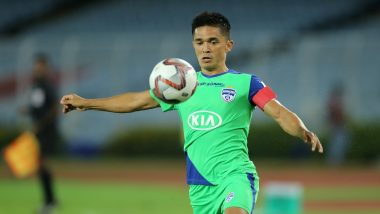 Guwahati, December 18: After a defeat in the last game, their first in the Hero Indian Super League, defending champions Bengaluru FC bounced back with a 2-0 win against NorthEast United FC at the Indira Gandhi Athletic Stadium here on Wednesday. After an even first-half, Bengaluru pulled ahead when Sunil Chhetri (68') converted a penalty conceded by the hosts for a handball inside the box. Centre-back Albert Serran (80') headed in his team's second to seal full points for Carles Cuadrat's team as they climbed to the top of the table with 16 points from nine matches.

NorthEast are without a win in four matches and find themselves at the sixth spot with 10 points after eight games. Bengaluru's attempts to build up play patiently in the opening minutes were thwarted by NorthEast's aggressive press. But clear-cut chances were few and far between for both teams in the first half. NEUFC vs BFC Head-to-Head Record: Ahead of ISL 2019 Clash, Here Are Match Results of NorthEast United FC vs Bengaluru FC Encounters in Indian Super League.

A poor pass by Nim Dorjee Tamang helped Chhetri charge straight at the hosts' defence in the 11th minute. The Blues skipper squared the ball for Ashique Kuruniyan whose shot towards goal was blocked by Tamang, who had by then recovered in time.

NorthEast United had a chance of their own when Martin Chaves pounced on Rahul Bheke's misplaced pass and dribbled into the box with just the goalkeeper to beat in the 25th minute. Gurpreet Singh Sandhu rushed off his line and made himself big to block the forward's shot and keep the score level.

Udanta Singh failed to convert a golden chance from close-range after the hour mark. A fleet-footed Ashique did extremely well to dribble into the box from the left flank and deliver the ball across the face of the goal. In front of an open net, Udanta met the cross with a header that ricocheted off the crossbar. The teams struggled to raise the tempo of the game even after the change of ends, with the final pass missing at both ends.

A dangerous Harmanjot Khabra cross from the right flank found its way towards Chhetri inside the box, but the striker could only direct his header straight at goalkeeper Subhasish Roy Chowdhury. Chhetri soon made amends for that miss, this time from 12 yards out, after the referee pointed to the spot to penalise a handball by Redeem Tlang inside the box. The India captain stepped up and coolly slotted the spot-kick home, sending the goalkeeper the wrong way.

Fernando Gallego, who was named on the bench after a lengthy injury layoff, replaced Jose Leudo as Robert Jarni sought a way back into the game. Tlang had a chance to redeem himself when he collected Reagan Singh's cross, but the forward was closed down quickly by Juanan before he could get a shot away.

With NorthEast United having to chase the game towards the end of the second half, Bengaluru made full use of the vacant spaces to double their lead. Erik Paartalu was given space and time on the ball to deliver a pin-point cross into the box from the left flank. Serran rose highest in the centre of the box to send a powerful header into the net, leaving Subhasish with no chance and settling the tie in Bengaluru's favour.

(The above story first appeared on LatestLY on Dec 18, 2019 11:52 PM IST. For more news and updates on politics, world, sports, entertainment and lifestyle, log on to our website latestly.com).