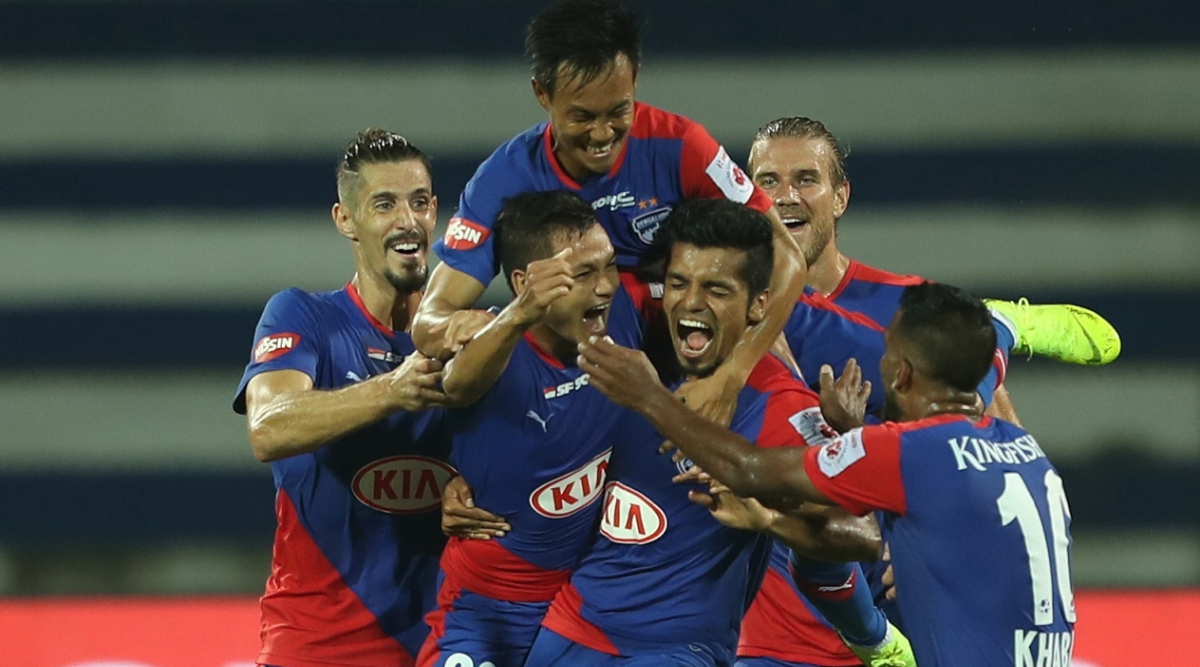 Bengaluru, January 22: Bengaluru bounced back from their defeat to Mumbai City in style with a dominating 3-0 win against Odisha FC at the Sree Kanteerava Stadium here on Wednesday. Deshorn Brown (23') scored in his first start for the Blues before goals by Rahul Bheke (25') and Sunil Chhetri (61' P) sealed the tie in favour of the home side. Bengaluru have now moved to the top of the Hero ISL points table with 25 points from 14 matches. Odisha's four-match winning streak came to an end on Wednesday but they hold on to the fourth spot with 21 points.

The teams were open with their approach in the early stages, with both sides playing a similar style. Odisha posed the first major threat when Xisco Hernandez delivered a sumptuous free-kick into the box in the third minute. Gaurav Bora met the ball inside the six-yard box but sent his header over the bar. Chennaiyin FC vs Jamshedpur FC, ISL 2019–20 Match Preview: Chennaiyin Host Jamshedpur in Chase for Playoffs.

Deshorn Brown, who made his first start for the club, missed an easy ball from Udanta Singh's low cross but made amends for it by breaking the deadlock in the 23rd minute. Erik Paartalu flicked Dimas Delgado's free-kick delivery across the goal for the Blues' new signing to dispatch it into the net.

It took just two minutes for Bengaluru to punish an Odisha backline that had lost focus. Paartalu once again was influential as he received Udanta's cross from the right flank and got a shot away. The strike took a deflection off Aridane Santana and fell perfectly for Rahul Bheke who gladly slotted it home. Odisha were dealt another double setback when both Aridane Santana and Marcos Tebar had to be taken off after suffering injuries.

Odisha, who struggled to dominate the game after the double blow, had a golden chance to get back into the game just before the break. Xisco's corner was flicked on by Carlos Delgado into the path of Martin Guedes who was in acres of space inside the box. The midfielder, however, hit the post from close range and Odisha continued their search for a goal.

The hosts were more physical and overpowering in all areas of the field as the visitors struggled to make an impact after restart. Brown latched on to a long ball from Juanan and nearly scored his second of the night, sending his effort just wide of the goal.

It was another set-piece that hammered home the final nail on Odisha at the hour mark. Guedes was deemed to have brought Paartalu down inside the box from a corner-kick by Delgado. Chhetri stepped up to convert from 12 yards and scored his ninth goal of the season.

Odisha did manage to get more of the ball as the Blues took their feet off the gas towards the end, but the visitors never looked likely to score the next goal. The absence of a threat allowed Bengaluru to see off the game and seal their seventh win and eighth clean sheet of the season.