United branded Dortmund’s August 10 deadline as ‘artificial’ and still believe they can complete the signing this transfer window. The club are reported to be back with new terms next week. They have reasoned that with the transfer window running until October 5, it is ridiculous to set a transfer deadline within the opening two weeks. 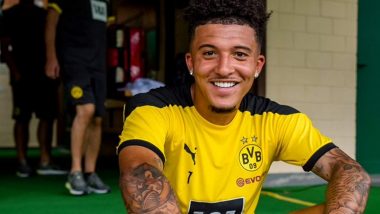 Jadon Sancho to Manchester United now faces the danger of turning into a long-drawn, boring transfer saga. The 20-year-old Borussia Dortmund star has been linked with the Red Devils even before he made the trip to Germany. But United have finally prioritised him as their main target for the right-wing spot this summer transfer window. The Premier Club, however, faces a tough road ahead with Dortmund reportedly refusing to lower their €120 million valuation of the English footballer while United have refused to pay such a high amount for the teenager. Borussia Dortmund Roasts Manchester United Over Stalled Negotiations for Jadon Sancho.

Worse news is that United have failed to make a bid or come to an agreement for signing Sancho within the August 10 deadline Dortmund had set a few weeks ago. The Bundesliga club had earlier informed they had given the Red Devils an August 10 to pay the €120 million upfront and complete the signing. With United failing to procure that money or reaching an agreement for any transfer within that deadline, Dortmund sporting director Michael Zorc said in a press conference that Sancho was staying at Dortmund next season. Despite Jadon Sancho Transfer Bombshell, Here Is Why Manchester United Fans Shouldn’t Be Worried.

#mufc and Borussia Dortmund are still negotiating for Jadon Sancho. Sancho's people will talk with Dortmund [@FabrizioRomano, pod save the ball]

“The decision is final. I think that answers all the questions,” said Zorc on Monday after the deadline expired. "Last summer we adjusted Jadon's salary to match the development of his performances. So in context, we had already extended his contract until 2023 back then."

But United, who branded Dortmund’s August 10 deadline as ‘artificial’, still believes they can complete the signing this transfer window. The club are reported to be back with new terms next week. The Premier League club have reasoned that with the transfer window running until October 5, it is ridiculous to set a transfer deadline within the opening two weeks.

Jadon Sancho has to do 'something' if he wants to leave Borussia Dortmund. Not necessarily go on strike, but ask to leave or find a way. At the moment, the deal is stopping #mulive [@FabrizioRomano, pod save the ball]

Reports had also stated that the club have failed to agree personal terms with Sancho and agent fees with his representatives. Sancho’s representatives are looking for €250, 000 per week in wages as well as a five-year contract. But the Red Devils are sceptical about paying such a high amount having seen themselves falter very badly with Alexis Sanchez, who earned €550, 000 per week but failed to draw it up with consistent performances.

Manager Ole Gunnar Solskjaer has also refused to tinker with the salary limit he has at the club as he feels paying Sancho more than the likes of Anthony Martial and Marcus Rashford will create disharmony within the group. Goalkeeper David de Gea and Paul Pogba are the only two players who earn more than the new cap set by Solskjaer. But amidst all this, United fans at least have a piece of good news.

#mufc's agreement with Jadon Sancho is totally complete, including his contract and the agent's commission, despite the club saying otherwise #mulive [@FabrizioRomano, pod save the ball]

Falk also confirmed that although Dortmund sporting director Zorc commented on Sancho staying, the agent who made deals for Ousmane Dembele’s transfer to Barcelona and Pierre-Emerick Aubameyang to Arsenal is involved in looking over the Sancho transfer. Romano, meanwhile stated that Sancho must put in a transfer request to speed up the move.

(The above story first appeared on LatestLY on Aug 12, 2020 10:22 AM IST. For more news and updates on politics, world, sports, entertainment and lifestyle, log on to our website latestly.com).