Dortmund director Michael Zorc publicly addressed Jadon Sancho to Manchester United transfer rumours saying that ‘Jadon Sancho will play with us next season. The decision is final. I think that answers all the questions,’ Despite these statements, here are the reasons why Manchester United fans can still be hopeful of the deal going through. 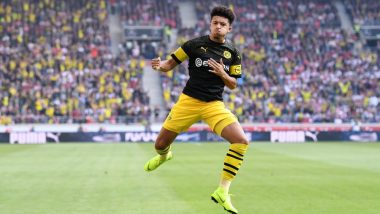 Manchester United suffered a huge blow in their pursuit of England star Jadon Sancho after Borussia Dortmund Chief Michael Zorc stated that the England star will be staying with the club next season and that decision is final. The Bundesliga side’s director also added that last year they ‘adjusted’ the former Manchester City youth academy players salary and have already renewed the 20-year-old's contract until 2023. Jadon Sancho Will Stay At Borussia Dortmund, Says Club Director Michael Zorc.

Jadon Sancho was named in the Borussia Dortmund squad that will travel for pre-season training camp in Switzerland despite strong Manchester United links. Following that, Dortmund director Zorc publicly addressed those transfer rumours saying ‘Jadon Sancho will play with us next season. The decision is final. I think that answers all the questions,’ Despite these statements, here are the reasons why Manchester United fans can still be hopeful of the deal going through. Manchester United Eye Federico Chiesa As Alternative Option to Jadon Sancho.

Despite Michael Zorc stating that Jadon Sancho will stay at Dortmund, the transfer window is still open which given Manchester United lot of time to strike a deal with the German side and pay the English striker’s asking fee of €120 million to sign him in the summer. The Premier League transfer window started on July 27, 2020, and will end on October 5, 2020.

Borussia Dortmund are a Selling Club

Borussia Dortmund are one of the biggest clubs in the world but the German side traditionally has been a selling club. Their transfer policy mainly revolves around signing young players, making them super-stars and then selling them for a huge profit. Robert Lewandowski, Pierre-Emerick Aubameyang and Ousmane Dembele are prime examples. So if Manchester United pay the right amount, chances are that the Bundesliga side will let Sancho go.

In recent years several stars have left Borussia Dortmund for different clubs for a huge transfer fee and prior to those moves, Michael Zorc’s comments have followed a similar pattern. Before Dembele and Aubameyang’s departure, the German chief stated that the players will ‘definitely’ remain at the club but they ended leaving the Black and Yellows soon after. So this should give the Red Devils hope that a deal is still possible.

(The above story first appeared on LatestLY on Aug 10, 2020 11:44 PM IST. For more news and updates on politics, world, sports, entertainment and lifestyle, log on to our website latestly.com).