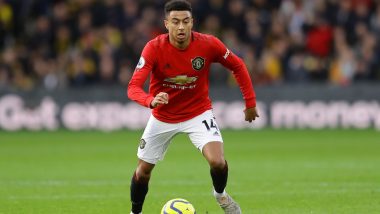 Manchester United manager Ole Gunnar Solskjaer has asked Jesse Lingard to play his way into form if wants to remain at Old Trafford next season. The England international last started for United against Derby County in the FA Cup in March and has not played in any of the club’s last four games, including Tottenham Hotspur and Sheffield United. He has endured a difficult campaign this term and not has scored a single league goal all season. And speaking of the playmaker ahead of the FA Cup quarter-final match against Norwich, Solskjaer said that he could play a role on Saturday. Ansu Fati’s Father Responds to Manchester United Transfer Links, Says ‘He Is Comfortable in Barcelona’.

Lingard, who has been at United since the age of seven and made his senior debut for the club in 2014-15, has not started in the Premier League since New Year’ Day when United lost to Arsenal and scored his last goal for the club against Tranmere in the Europa League while drawing a blank in the Premier League since last season. He has also found playing time hard to come by following the January arrival of Bruno Fernandes. Anthony Martial’s Hat-Trick Against Sheffield United Ends Disastrous Manchester United Run in Premier League.

His contract at United expires next year and although United have the option to extend it for another 12 months, there is little doubt that he will be placed on the market with uncertainty also lingering over his future since he formed an allegiance with Mino Raiola, who has been severely critic of United and their handling of players.

Lingard was left as an unused substitute at Tottenham Hotspur while he not in the matchday squad for the home league fixture against Sheffield United. The manager confirmed that Lingard was unwell and had taken off ahead of the Sheffield match but is available for the Norwich clash and could play a role.

"He has come back after the lockdown with a smile on his face and loads of energy," Solskjaer said talking of Lingard. "Last week he fell ill for a couple of days but we have done all the tests and he’s fine. He will be involved against Norwich now. "Hopefully he can kick on. He has scored vital goals for us, and has been a vital player for us. Let’s see what the future will hold. At the moment he is looking really sharp and focused,” he added.

(The above story first appeared on LatestLY on Jun 26, 2020 06:29 PM IST. For more news and updates on politics, world, sports, entertainment and lifestyle, log on to our website latestly.com).