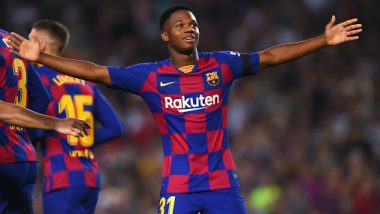 Barcelona teenager Ansu Fati has been tipped with a move away from Camp Nou as Manchester United are reportedly interested in bringing the 17-year-old to Old Trafford. The youngster has played a crucial part for the Catalan side this season and has come up with some crucial goals. The Spanish U-21 international is enjoying a breakthrough season and amidst all these speculations, his father has opened up about the United rumours. Arthur Melo Transfer News Latest Update: Juventus Agree Transfer Fee With Barcelona for Brazilian Midfielder.

Ansu Fati’s rise to football stardom has been nothing short of spectacular, the Guinea-Bissau born winger made his first-team debut before even taking the field for reserves and has been impressive during his debut top-flight season. With the kind of season Fati is having, there is no surprise to see that several European heavyweights are interested in him, however, the possibility of him leaving the club are very slim. Ansu Fati Scripts History With a Goal & Assist During Barcelona vs Valencia, La Liga 2019-20 (Watch Video).

While speaking to Cadena Ser, Bori Fati, Ansu’s dad said ‘I've always been happy since my son is at Barca ... I know nothing about Manchester United. Ansu and I are comfortable here in Barcelona. Everyone that leaves Barca then wants to come back.’

Earlier in the month, Barcelona director Xavier Vilajoana ruled out the possibility of selling the talented teenager. ‘For us, there's no story with Ansu, we have never spoken about selling him. We won't use players from the academy to make cash. In principle, we have no intention of selling the players we believe will make the first team’ he told Sport.

Ansu has continued his fine form since the restart as well. The 17-year-old opened the scoring in Barcelona’s 2-0 win over Mallorca and was crucial in their latest triumph over Athletic Bilbao. The youngster has been involved in seven goals this season in all competitions.

(The above story first appeared on LatestLY on Jun 25, 2020 04:47 PM IST. For more news and updates on politics, world, sports, entertainment and lifestyle, log on to our website latestly.com).