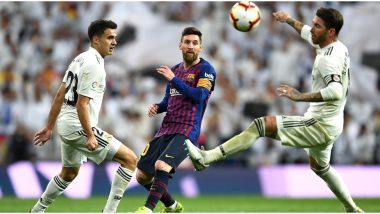 The introduction of the controversial European Super League (ESL) has taken the football firm by storm. On Sunday (April 18), 12 of Europe’s leading football club including Juventus, Barcelona and Manchester United announced the formation of the new competition. With top clubs of Premier League, La Liga and Serie A taking part in the tournament, the league is an effective rival of UEFA Champions League. Recently, American Investment banking company JP Morgan announced it was financing the new breakaway Super League. A spokesman for the Baking firm, in an email, confirmed its involvement with the new league. What is European Super League? Know About the Competition Format, Clubs Participating and Other Important Details of the New Controversial Football Tournament.

With ESL being a direct competition to Champions League, UEFA, in a statement has threatened to ban all the participants of the new competition.  This puts the Champions League 2020-21 semi-final fixtures under dark clouds with three of the top four teams, Chelsea, Manchester City and Real Madrid, being the founding members of the Super League.

Moreover, all leagues have also issued strong statements slamming the club's participation in the new competition. Hence, its highly likely that these 12 big guns might well be banned from UCL as well as their national leagues if the European Super League gets implemented.

(The above story first appeared on LatestLY on Apr 19, 2021 03:32 PM IST. For more news and updates on politics, world, sports, entertainment and lifestyle, log on to our website latestly.com).