Karim Benzema has now become the second-highest scorer in Real Madrid history. The Frenchman has netted 323 goals for Los Blancos, the same tally reached by club legend Raul before departing. 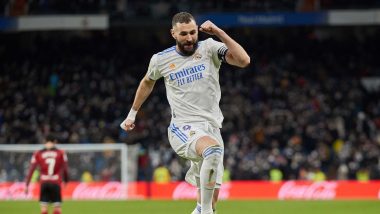 Karim Benzema has had an impressive campaign so far and the Frenchman continues to reach new heights this season. With his latest strike in a dominant performance against Levante, the France international has become the second-highest scorer in history for Real Madrid, equalling the record of Spanish great Raul. A Look At Liverpool and Real Madrid's Record in Champions League Finals Ahead Of Summit Clash.

The newly crowned La Liga champions bounced back to winning ways from their derby defeat to rivals Atletico Madrid with a stellar performance against Levante. Real Madrid were sensational on the night as they emerged victorious with a scoreline of 6-0.

Vinicus Jr was the star as the Brazilian scored a brilliant hat-trick for the Los Blancos. However, the 21-year-old had to share the headlines with strike partner Karim Benzema on the night as the Frenchman reached another goal-scoring milestone.

Karim Benzema has now become the second-highest scorer in Real Madrid history. The Frenchman has netted 323 goals for Los Blancos, the same tally reached by club legend Raul before departing.

However, the Frenchman still has a long way to go to reach the summit of the goal-scoring list for the Madrid side. Cristiano Ronaldo leads the charts for Los Blancos having scored 450 goals for the club during his nine-year star from 2009 to 2018.

Karim Benzema is having a stellar campaign. The veteran netted his 27th goal in La Liga this season, taking his goal tally to 43 in all competitions for the Los Blancos. The Frenchman has been crucial in Real Madrid's league title win and their run to the Champions League final.

(The above story first appeared on LatestLY on May 13, 2022 10:21 AM IST. For more news and updates on politics, world, sports, entertainment and lifestyle, log on to our website latestly.com).