The two brothers were involved in a horrific incident of animal abuse wherein one abused their cats and assaulted them and the other filmed them. They are set to appear in court this week. 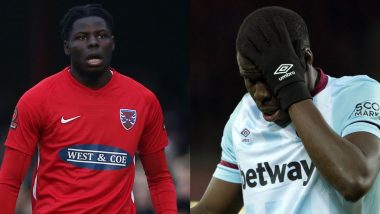 West Ham defender Kurt Zouma, who had made the news earlier this year, for kicking and abusing his cat, has been charged under the Animal Welfare Act. While Zouma has been charged with three offenses, his younger brother Yoan was accused of two offenses. The two brothers are slated to appear at the Thames Magistrates Court for their first hearing this week. In a video that went viral on social media in February, Kurt and his brother Yoan kicked and slapped his cat in their house. Kurt Zouma Cat Attack Video: Graeme Souness Slams West Ham Defender for Assaulting the Innocent Feline, Says, ‘Have Zero Sympathy for Him’ (Watch Video)

While there was a huge social media outrage against the brothers, with fans calling for their clubs to suspend them, West Ham continued to have Kurt in their team up until the UEFA Europa League 2021-22 final. Yoan on the other hand, was suspended by his club Dagenham and Redbridge. Graeme Souness also blasted Kurt Zouma, stating that he doesn't have any sympathy for the player after this act of his.

Kurt was charged with two counts of causing "unnecessary suffering" to the animal and one count of a breach of animal welfare duty. Yoan, who filmed his brother committing the violence on the animals, has been charged with two counts of aiding, abetting and helping his elder in the crime. After the incident, the Royal Society for the Prevention of Cruelty to Animals (RSPCA) took away the felines from the Zouma's and have been caring for them since then.

(The above story first appeared on LatestLY on May 23, 2022 09:38 PM IST. For more news and updates on politics, world, sports, entertainment and lifestyle, log on to our website latestly.com).