Manchester City vs Manchester United: Gabriel Jesus, Marcus Rashford & Other Players to Watch Out For During Manchester Derby in Premier League 2019-20 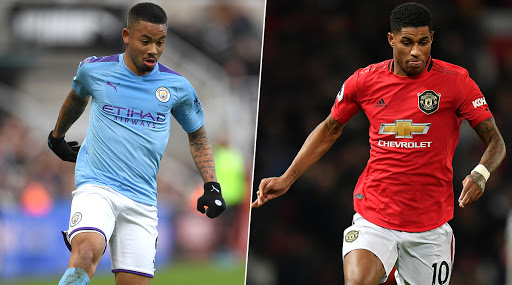 Manchester City and Manchester United are set to lock horns in the first Manchester Derby of the 2019-20 Premier League season. The 179th derby will be played at the Etihad Stadium on December 7, 2019 (Saturday). This will be an exciting affair between top-four chasing United and title-chasing City. The Red Devils defeated Tottenham Hotspur in their last match thanks to a brilliant brace from Marcus Rashford, while the Cityzens thrashed Burnley 4-1 away from home. Both teams are filled with superstars – City more than United – and have players in their teams who can change the game in an instance. So ahead of this all-important derby, we take a look at some key players from both the teams. Manchester Derby December 2019 Screenings in Mumbai, Pune, Delhi and Bangalore: Enjoy Man City vs Man United Football Match At These Happening Places.

Ole Gunnar Solksjaer's side need to get their Champions League push back on track after a worrying drop in form but the victory against Spurs will give them much needed confidence going into this game. On the other hand, Pep Guardiola’s men are also in a need a win to maintain pressure on leaders Liverpool and keep their title hopes alive. A match of this caliber always has big-name stars on display but both teams are missing some of their important players for this clash. French midfielder and World Cup winner Paul Pogba will be unavailable for the Red Devils while Argentine goal-machine Sergio Aguero will be absent from the City squad. Here are the players to watch out during this match. Premier League 2019-20: Everton Sack Head Coach Marco Silva After Merseyside Derby Defeat.

The Brazilian since his move to City in 2017 has always been a second fiddle to star man Sergio Aguero. This season has started in the same fashion for the former Palmeiras forward as regular game time is hard to come by but since Aguero’s injury, the Brazilian has been getting regular chances. If Jesus wants to cement his place in the City side he will not get a better opportunity than this.

The 22-year old Englishman has been the main driving for behind the Red Devils this season. The forward is in fantastic form and has scored 5 goals in his last seven matches. Marcus Rashford will be the most important player for United going forward as Anthony Martial is expected to miss the match.

The Algerian regained his spot in City’s starting line-up and has been influential in their recent matches. Mahrez finished in the top-10 of Ballon d’Or rankings which was revealed earlier in the month by France Football. The Algerian captain has four goals and three assists in 11 PL games so far and will be looking to add to his tally.

The Welsh international has set the stage on fire in his first full season in England’s top division. The youngster started the season with a bang as he scored three goals in his first four matches but has fallen off the pace since. This will be a good opportunity for the youngster to show his quality and get his side an important win.

The Spaniard will have a massive task of keeping out the free-flowing Manchester City attack. United’s number 1 will need to be at his best in order to give Red Devils any chance of getting a positive result out of the game. David de Gea has kept only two clean sheets this season and will be looking to improve that in this match.

Manchester City are the better team at the moment and also have form on their side but form means very little in games like this when player's from both teams are pumped up and ready to give their all out on the field.