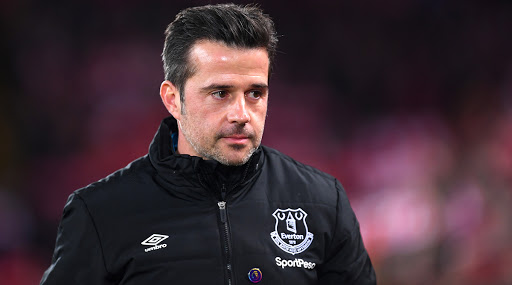 London, December 6: English Premier League club Everton has sacked their manager Marco Silva. "Majority Shareholder Farhad Moshiri, Chairman Bill Kenwright and the Board of Directors would like to thank Marco for his service over the last 18 months and wish him well for the future," the club said in a statement on Thursday. The Portuguese has become the fourth Premier League manager being fired within three weeks after Tottenham's Mauricio Pochettino, Arsenal's Unai Emery and Watford's Quique Sanchez Flores. Premier League 2019-20: Watford Sack Manager Quique Sanchez Flores After 85 Days Incharge.

Everton lost to Liverpool 2-5 on Wednesday, and has clinched only four victories from 15 Premier League matches so far are placed at the 18th spot of 20 teams. Silva, 42, was appointed as manager of Everton in May 2018. He steered the team to an eighth finish last season. Manchester Derby December 2019 Screenings in Mumbai, Pune, Delhi and Bangalore: Enjoy Man City vs Man United Football Match At These Happening Places.

The club also said that Duncan Ferguson has taken temporary charge of the first team and will manage the side for the game against Chelsea on Saturday.