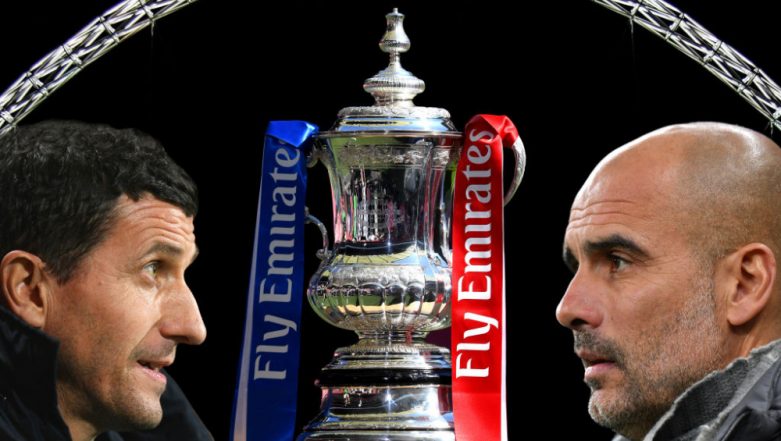 Pep Guardiola’s Manchester City have the chance to win a domestic treble which has been unheard of in England. Last week they wrapped up the league after a fascinating battle with Liverpool with the title decided on the final day. It was the first time in a decade that a team was able to defend its crown in the fiercely contested English Premier League. The Carabao Cup win over Chelsea was another crowning moment back in February and now they have their sights set on the FA Cup. Watford have played some wonderful football this season and their comeback win over Wolves in the semi-final was a real glory moment for the Hornets. Check Manchester City vs Watford live streaming details below. Zlatan Ibrahimovic Suspended Two Games for Violent Conduct.

Manchester City have some good news on the injury front with Fernandinho, Kevin De Bruyne and Benjamin Mendy all fit to face Watford in final. Vincent Kompany, their man for big occasion looks set to partner Aymeric Laporte at the heart of defence. Ilkay Gundogan might keep out Fernandinho from the playing eleven given the form he has shown in the past couple of weeks. David Silva has probably been the best midfielder in English top-flight football over the past decade and his presence will be enormous once again. In attack, the trio of Raheem Sterling, Sergio Aguero and Bernardo Silva make have goals in them.

Gerard Deulofeu who played a key role in Watford reaching the final is fit again after a suffering a dead leg in their last league game. The Spaniard has the pace and trickery to stretch the City defence and create mayhem at the back. Abdoulaye Doucoure is a powerful figure in the Hornets midfield and he will need to win back possession with every opportunity available. Upfront, there is no looking past Troy Deeney who is known for his crucial goalscoring ability. New Indian Coach Igor Stimac Should be Demanding, Says Sunil Chhetri

Manchester City will take on Watford in the final of FA Cup 2018-19 Final, on April 18, i.e. Saturday. The game will be played at the Wembley Stadium. The contest is scheduled to take place at 09:30 PM (IST).

Where to Watch the Live Telecast of Manchester City vs Watford, FA Cup 2018-19 final Football Match?

Sony Pictures Network holds the official broadcasting rights of FA Cup 2018-19 final in India. The fans will have to tune into Sony Six and Sony Six HD channels to catch the match telecast of Manchester City vs Watford final live on their television sets.

The FA Cup 2018-19 final match can be viewed through online streaming too; for that, the fans will have to see Manchester City vs Watford match, then you can see it via Sony Network's live streaming service, i.e. SonyLiv (website, app).

Watford are on ten game losing streak against Manchester City and though they may trouble Pep Guardiola’s men in brief periods, it will not be enough to win them the FA Cup.