MLS: Fans Boo Players for Kneeling During US National Anthem in Support on BLM Movement Before FC Dallas vs Nashville Clash 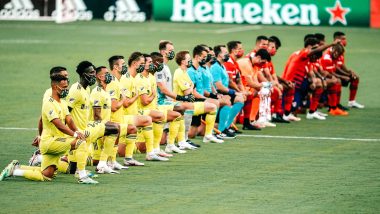 Following football’s restart in the United States, the match between FC Dallas and Nashville became the first major sporting event to allow fans back into the stadium. However, players from both the teams were greeted with boos as they collectively took a knee during the US National anthem before in support of the BLM movement their fixture in Major League Soccer on Wednesday in Texas. Portland Timbers Beat Orlando City 2-1 to Claim 'MLS is Back Tournament' 2020.

Major League soccer has permitted clubs to allow a small number of supporters in their stadiums. And around 3000 fans were allowed to attend the FC Dallas vs Nashville match at the Toyota Stadium on Wednesday despite the coronavirus pandemic. However, a small number of fans turned on both sets of players as they voiced their displeasure over the teams kneeling on one knee, showing their solidarity towards the Black Lives Matter movement. NBA Players Take a Knee in Support of Black Lives Matter Movement As League Restarts in Florida.

Dallas defender Reggie Cannon was not happy with the behaviour as he slammed the fans for their disgraceful conduct. ‘You can’t even have support from your own fans in your own stadium. It’s baffling to me, as a team we try to give the best possible product on the field and these last six months have been absolute hell for us. Absolute hell.’ said Cannon.

‘You got fans booing you for people taking a stand for what they believe in. Millions of other people support this cause and we discussed with every other team and the league what we’re going to do and we’ve got fans booing us in our own stadium. How disgraceful is that? Honestly, for lack of a better word, it pissed me off.’ He added.

The behaviour displayed by the fans before the game might have affected the players’ on-field performance as Dallas ended up losing the game 1-0. David Accam scored the only goal of the game as he netted on the 86th minute. This was both the sides first game since the coronavirus enforced suspension on March 12.

(The above story first appeared on LatestLY on Aug 13, 2020 06:35 PM IST. For more news and updates on politics, world, sports, entertainment and lifestyle, log on to our website latestly.com).