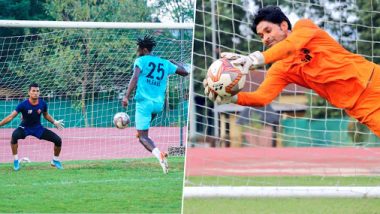 NorthEast United FC vs FC Goa, ISL 2019 Live Streaming Online and TV Telecast Details: FC Goa will travel to NorthEast United for Match 13 in the Indian Super League (ISL) on November 1, 2019 (Friday). The Highlanders will be looking to record two consecutive wins when Goa come to visit. NorthEast won their first match of the season against newcomers Odisha while Goa were held to a draw by the reigning champions Bengaluru. Both the teams are unbeaten in this edition of ISL. Meanwhile, fans searching for the live telecast and streaming details of FCG vs KBFC game, can scroll down for all information. NorthEast United FC Vs FC Goa - Live Football Score, Match 13.

Both teams have four points from their opening two games. NorthEast sit in the fourth position on the points table, while Goa are third. Asamoah Gyan scored his first goal in ISL for the Highlanders in the last match and will be hungry for more. Goa have their firepower in forward Ferran Corominas, who will be playing his 50th ISL match and has already scored in the opening two games. Ferran is also the all-time leading goal-scorer in ISL history. FCG vs NEUFC Head-to-Head Record.

NorthEast United FC vs FC Goa clash will be match number 13 in the Indian Super League (ISL) season 6. FCG vs NEUFC game will be played at Indira Gandhi Athletic Stadium on November 1, 2019 (Friday) and is scheduled to start at 07:30 pm IST (Indian Standard Time)

Fans can catch the live-action of NorthEast United FC vs FC Goa game on Star Sports channels. Star Sports is the official broadcaster of Indian Super League (ISL) 2019-20 and has been live streaming all the matches. Viewers can switch to Star Sports 1, Star Sports 1 HD, Star Sports 2 and Star Sports 2 HD to watch live telecast the FCG vs NEUFC encounter.

Those who cannot watch the live-action of NorthEast United FC vs FC Goa clash on television, can shift to online platforms. Hotstar, which is the official online media platform of Star Network, will be live streaming the FCG vs NEUFC game online. You can either download the Hotstar app or tune into hotstar.com. Subscribers of JIO and Airtel TV can also catch the live action of NorthEast United FC vs FC Goa match online. Viewers can also follow LatestLY for the live score updates of FCG vs NEUFC encounter.

After two home games, Goa will travel for the first time this season and a daunting task awaits them in Guwahati. The Highlanders are unbeaten in their last seven home games. They will be looking to make their home advantage count and get a crucial win.

(The above story first appeared on LatestLY on Nov 01, 2019 06:07 PM IST. For more news and updates on politics, world, sports, entertainment and lifestyle, log on to our website latestly.com).