FCG vs NEUFC Head-to-Head Record: Ahead of ISL 2019 Clash, Here Are Match Results of NorthEast United vs FC Goa in the Last 5 Encounters in Indian Super League

NorthEast United will host FC Goa in Match 13 of the Indian Super League (ISL), 2019-20 on November 1, 2019 (Friday). In head-to-head (H2H) records between the teams of the last five matches, Goa have won twice and NorthEast have recorded just a single win. The remaining two matches ended all-square. 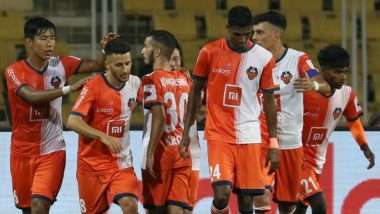 NorthEast United will host FC Goa in Match 13 of the Indian Super League (ISL), 2019-20 on November 1, 2019 (Friday). Both the teams are unbeaten in this campaign and will be eager to keep this momentum going. NorthEast recorded their first victory of the season against Odisha while Goa were held to a draw by Bengaluru. Lobera’s side has come out on top in the past five meetings between the two sides. In head-to-head (H2H) records between the teams of the last five matches, Goa have won twice and NorthEast have recorded just a single win. The remaining two matches ended all-square. NorthEast United FC Vs FC Goa - Live Football Score, Match 13.

Both the teams sit in the top four and will be battling it out for a top spot in the points table. NorthEast will bank on their new star-signing Asamoah Gyan who opened his ISL account against Odisha FC. Goa, on the other hand, have an ISL veteran on their side in Ferran Corominas, who will be playing in his 50th ISL match. Ferran is also the all-time leading goal-scorer in ISL history and has started the season in a similar fashion by scoring goals in both the matches. FCG vs NEUFC Dream11 Prediction in ISL 2019–20.

Goa thrashed NorthEast in a fairly one-sided affair. Ferran Corominas bagged a brace while Edu Bedia, Hugo Boumos and Migue Fernandez each scored a goal. Ogbeche scored a consolation goal for the Highlanders.

Federico opened the scoring for NorthEast but they were quickly pegged back by a quickfire double from Ferran Corominas. Ogbeche then scored in just eight minutes after the half-time break to give the home side an equal share of points.

After a cagey first 40 minutes, the game came to life when Mandar Rao opened the scoring for the home side but Marcio de Souza equalised just before half-time for the visitors. Ferran Corominas put Goa back in front after half-time but a late goal by John Mosquera ensured that the points were shared.

Marcio de Souza opened the scoring for the Highlanders but Goa quickly equalised through Manuel Arana. Seminlen Doungel then put the home side ahead just after the half-time break and secured a crucial win for NorthEast.

NorthEast’s Seityasen Singh opened the scoring but the visitors were quickly pegged back by a strike from Robin Singh. The game was heading for a draw but Romeo Fernandes in the dying minute of the game scored a fantastic goal and gave the home side all three points.

After playing the opening two matches at home, Goa will travel for the first time this season but they have an intimidating task in front of them as the Highlanders are undefeated in their last seven home games. Both the teams will be eager to record a win and continue their undefeated start to the season.

(The above story first appeared on LatestLY on Nov 01, 2019 01:05 PM IST. For more news and updates on politics, world, sports, entertainment and lifestyle, log on to our website latestly.com).