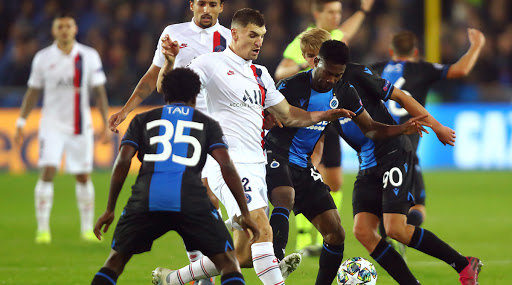 Paris Saint-Germain will host Club Brugge in a Group A clash of the UEFA Champions League 2019-20. The sides met earlier this season on matchday three, PSG demolished Brugge 5-0 where Kylian Mbappe scored a hat-trick and Mauro Icardi bagged himself a brace. PSG have a hundred percent record in this season’s group stage. They defeated Real Madrid on the opening day and then scraped past Galatasaray in their second game. Meanwhile, if you are searching for Paris Saint-Germain vs Club Brugge live streaming and live telecast details, you will find the relative information below. PSG Boss Thomas Tuchel Rejects Offer From German League Champions.

PSG are boosted by the return of their captain Thiago Silva who missed their weekend loss against Dijon due to illness. But Coach Thomas Tuchel will be without the services of some big-name players like Neymar, Ander Herrera and Thomas Meunier as all of them are out injured. Julian Draxler also came back from injury as he made a substitute appearance against Dijon on the weekend.

Club Brugge travel to Paris on the back of two consecutive wins in their domestic league. First choice full-back Clinton Mata is likely to miss out as he is suffering with a hamstring injury, midfielder Ruud Vormer will also be unavailable for this match as he is suspended.

Paris Saint-Germain vs Club Brugge will play each other in a Group A match of UEFA Champions League 2019-20 on November 7 at 01:30 pm IST (Indian Standard Time). The match will be held at Parc des Princes in Paris.PSG lead their group while Club Brugge are bottom.

The Paris Saint Germain vs Club Brugge encounter in the UEFA Champions League 2019-20 will be telecast live by Sony Pictures Sports Network (SPN) on their television channels - Sony Ten 2 and Sony Ten 2 HD.

Fans can Log in to the Sony Liv app, which is providing the option for live-streaming the Paris Saint Germain vs Club Brugge match. You can catch the live-action of the Champions League Group H encounter by either downloading the Sony Liv app or by switching into sonyliv.com. Along with that, fans can also follow LatestLY for all the live score updates.

The Parisians will look to extend their perfect start to the campaign with yet another win and cement their place in the knockout stages. Meanwhile, Club Brugge will look to take inspiration from their draw earlier this season at the Bernabeu and produce another shock result away from home. Victory is a must for the Belgium side if they want to advance further in this competition post-December.