Following the clash with Gunners keeper Emiliano Martinez, the 33-year-old was attended by Chelsea medical staff. After receiving some treatment on the pitch, the world cup winner was taken off on a stretcher. It looks like the injury will require a long treatment but the length of it is yet to be confirmed by the club. 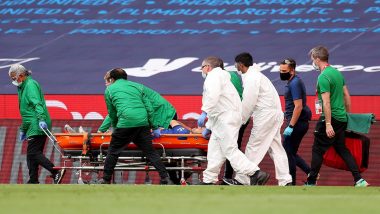 Pedro Rodriguez played his last game for Chelsea on Saturday (August 1, 2020) in the final of the FA Cup 2019-20 against Arsenal. The Spaniards final few moments at the Blues saw him being carried out on the stretcher as he suffered a serious injury. The winger’s contract with the London club is coming to an end and he will leave for AS Roma once the current season concludes. Chelsea Star Willian Reacts After Being Left Out of Squad for FA Cup 2019–20 Final Match Against Arsenal.

Pedro didn’t start the final against Arsenal but came on early in the second half as a replacement for American forward Christian Pulisic, who had to be taken off after suffering an injury. However, the former Barcelona star was not able to make the desired impact in his final game as Pierre-Emerick Aubameyang scored past the hour to put Arsenal 2-1 up. Abhishek Bachchan Overwhelmed As Chelsea FC Sends ‘Speedy Recovery’ Letter to Him (View Post).

While trailing the game, in the final few minutes, Pedro was chasing down the ball but went down in the box after a clash with the Arsenal keeper and seemingly came off worse. In the post-match interview, Frank Lampard addressed his injury and said that the Spaniard might have dislocated his shoulder.

Pedro won't be able to see this one out. He has been stretchered off and is being given air. looked like a horrible shoulder injury.Boss Arteta become the 1st manager to be booked in FA Cup final after a confrontation with Rudiger who also shown a yellow card as tensions flared. pic.twitter.com/i9Lao6CpV9

Following the clash with Gunners keeper Emiliano Martinez, the 33-year-old was attended by Chelsea medical staff. After receiving some treatment on the pitch, the world cup winner was taken off on a stretcher. It looks like the injury will require a long treatment but the length of it is yet to be confirmed by the club.

A few moments before his injury, the Spaniard was denied a free-kick on the edge of the box after which to make up for it he went on to chase the ball and collided with the Arsenal player. Due to this, Chelsea fans are blaming the referee Anthony Taylor for his injury.

This Pedro injury Is on the ref as well.

Blame on the Ref

This Pedro injury wouldn't have happened if he gave the foul, wallah Anthony Taylor needs to be shot

F@ckin ref!!! Couldn’t even play all the minutes that should have been added for the Pedro injury. Ref was shit. But we do need to improve

Anthony Taylor should end this game

All Chelsea players are injured 😏

I blame him for Pedro's Injury 👩‍🔧

Chelsea had a bad day all-round at Wembley on Saturday, as not only the Blues succumbed to a 2-1 defeat against Arsenal but they lost Captain Cesar Azpilicueta and forward Christian Pulisic due to hamstring injuries. Both players will be unavailable for the Champions League game against Bayern Munich.

(The above story first appeared on LatestLY on Aug 02, 2020 08:43 AM IST. For more news and updates on politics, world, sports, entertainment and lifestyle, log on to our website latestly.com).